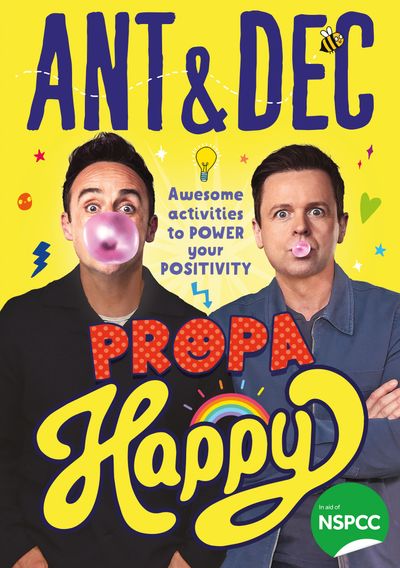 What makes YOU happy?

Do you love playing games? Football? Drawing? Jokes? Quizzes? Spending time with your friends and family? Whatever makes you smile, Ant & Dec are here to help you find your fun and power your positivity!

Propa Happy is a fun-filled guide to feeling good for children aged 7+, packed with games, jokes, challenges and quizzes to make kids smile. Created in consultation with a child psychology expert and with guidance from the NSPCC, it also includes advice and activities to help children nurture their emotional well-being every day.

So, get involved, get creative, be yourself . . . and remember: you are AMAZING!

Ant & Dec are the multi-award-winning presenters of Saturday Night Takeaway, Britain’s Got Talent and I’m a Celebrity Get Me Out of Here. They are the winners of 20 National Television Awards and 13 BAFTAs, as well as topping the Singles Chart in 2013 for the rerelease of their 1994 hit ‘Let’s Get Ready to Rhumble’. Ant & Dec are NSPCC Ambassadors for Childhood, and all their proceeds from this book will go to support the NSPCC.

The NSPCC is the leading children’s charity fighting to end child abuse in the UK and Channel Islands. Using voluntary donations, they help children who’ve been abused to rebuild their lives, protect children at risk, and find the best ways of preventing child abuse from ever happening.

Author: Ant McPartlin
Format: Digital download
Ageband: 7 to 10
Release Date: 26/05/2022
Pages: None
ISBN: 978-0-00-852435-7
After appearing on Byker Grove together in 1990, Ant & Dec's career across TV, film and music has spanned 30 years. They have won over 100 awards – including over 40 National Television Awards, 13 BAFTAs and one Guinness World Record – and they even bagged a Chart number 1 in 2013 for 'Let's Get Ready to Rhumble' (almost 20 years after the song's original release). They are NSPCC Ambassadors for Childhood, as well as being active supporters of several other charities, including the Prince's Trust. Ant & Dec were both born and raised in Newcastle.Katie Abey’s artwork is packed with happiness, humour and motivation messages. She has published a string of titles, including We Wear Pants and follow-up titles, which she wrote and illustrated.Dr Miquela Walsh DEdPsych, MsC (Dist), BSc (Hons), HCPC accredited is an Educational Psychologist who supports children and young people with a range of emotional, social, and learning needs.