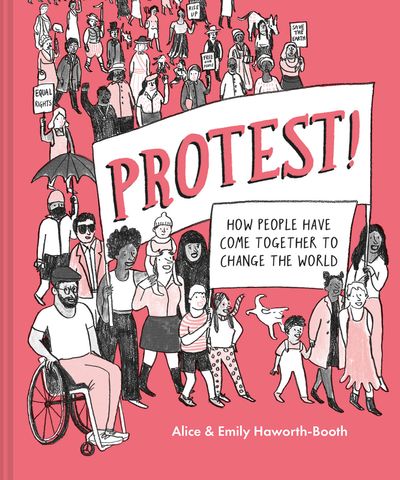 Protest!: How people have come together to change the world

An inspiring and timely illustrated history of peaceful protests from around the world – from 1170 BCE to the present day. Illustrated by award-winner Emily Haworth-Booth, and written by Emily and her sister Alice.

An inspiring and timely illustrated history of peaceful protests from around the world – from 1170 BCE to the present day.

Protest has changed the planet – from Roman times to today, ordinary people have stood up for what they believe in and made the world a better place. Children are more likely now than ever before to make a peaceful stand against what they believe is wrong in the world. The time is right for a book that sets out the history of protest and how it has changed our society.

Illustrated by award-winner Emily Haworth-Booth, and written by Emily and her sister Alice, this book covers the global history of protest from 1170 BCE, when workers on the pyramids in Egypt went on strike for more food, to the present day, with the school strikes for climate. From the women’s march in Rome, through the peasants’ revolt, the abolitionist movement and the suffragette movement right through to Extinction Rebellion and Black Lives Matter.

Author: Emily Haworth-Booth
Format: Hardback
Ageband: from 7
Release Date: 10/06/2021
Pages: 168
ISBN: 978-1-84365-458-2
Alice Haworth-Booth is a graphic designer and writer. She has spent over a decade creating bold and colourful visuals for campaigns and activist groups and has won awards for her short stories. Protest! is her first book.Emily Haworth-Booth is an award-winning author, illustrator and educator who teaches at the Royal Drawing School in London, England. Alongside her children's picture books, Emily is currently working on a long-form graphic memoir for adults. Her short comics have previously appeared in print in the Observer and Vogue. Along with her sister, Alice Haworth-Booth, she is an activist with Extinction Rebellion.