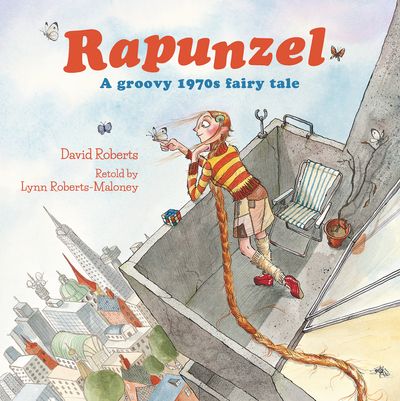 Set in the glamorous seventies, this lively retelling is bursting with colourful period detail as Rapunzel goes from being a tower-block prisoner to a free and groovy girl.

Meet a truly funky, flares-clad fairy-tale heroine and a genuinely frightening villain in this hilarious re-working of a much-loved fairy tale. Poor Rapunzel can only dream about the world outside because her Aunt Edna keeps her locked up in their tower-block home. The lifts don’t work and Aunt Edna is too lazy to take the stairs, so she uses Rapunzel’s extraordinarily long hair to climb in and out of their tiny flat. Rapunzel’s life is confined within orange and brown flower-printed walls, with only her beloved records for solace. But then one day, a handsome stranger climbs up her hair and a new adventure begins.

Other books in the series: Sleeping Beauty, Little Red and Cinderella.

Format: Paperback
Ageband: 5 to 7
Release Date: 01/04/2017
Pages: 40
ISBN: 978-1-84365-318-9
Lynn Roberts has worked with children’s literature for many years – both as a specialist in book shops and as a writer. She is the author of modern adaptations of the classic fairytales of Sleeping Beauty, Rapunzel, Little Red and Cinderella.David Roberts began his career in fashion illustration. He has since illustrated numerous children’s books, for which he has won and been shortlisted for awards. His work ranges from Pavilion Books' fairy tale retellings, to his brilliantly funny books with Julia Donaldson such as Tyrannosaurus Drip, The Troll and The Cook and the King. He has also earned great success through his books with Andrea Beaty (Ada Twist, Scientist and others) and his self-authored title Suffragette.