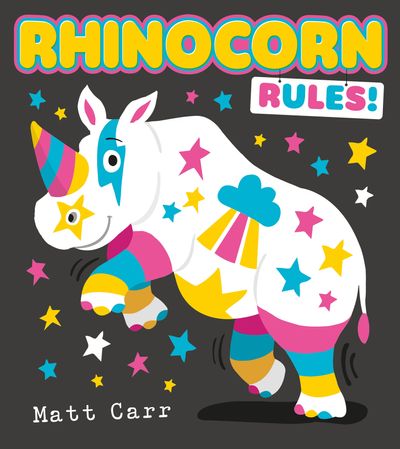 Illustrated by Matt Carr, this colourful picture book will teach 3 to 5-year-olds to always be themselves and make new friends, as well as some fun facts about rhinos! If you loved Supertato, Superbat and Julian is a Mermaid, come meet Ron in Rhinocorn Rules!

Ron is a rhino like no other. He doesn’t like to live by the other rhino rules – the other rhinos are grumpy, solitary and they will charge at anything that gets in their way. But not Ron. Ron likes music, art and only wants to have fun. He is determined to live his best life and not conform to the herd. When Ron paints himself into a bright unicorn, all of the other animals think he’s the coolest animal ever, but his rhino family are less impressed. Will they learn to embrace Ron for who he really is?

An uplifting and funny new picture book story about daring to be different, from the creator of Superbat.

Author: Matt Carr
Format: Paperback
Ageband: from 3
Release Date: 24/03/2020
Pages: 32
ISBN: 978-1-4052-9688-5
Matt Carr has worked in design for over fifteen years and has worked on a wide range of projects for clients such as Channel 4, Nickelodeon, BSA, ITV, MTV, Channel 5, Sainsburys, Penguin Books and Imperial War Museum. He is the creator of several books for children including Spyder, Rocketmole and Superbat, which was shortlisted for the Waterstones Children's Book Prize 2018.