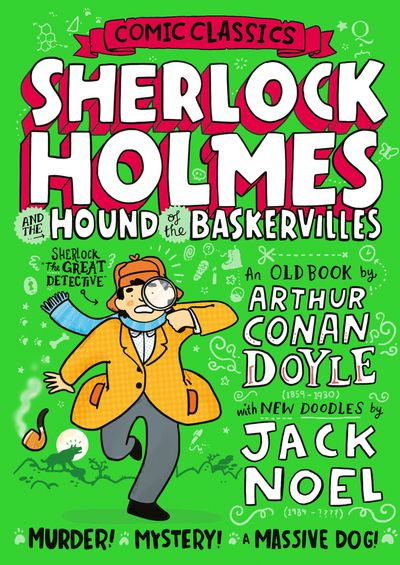 OLD books get NEW doodles – it’s the classics as you’ve never seen them before!

A hilarious new series that brings the classics to life with illustrations by Jack Noel. Perfect for 7 – 9 year olds and fans of Tom Gates, Wimpy Kid and Dav Pilkey. And SHERLOCK HOLMES!

Solve a SPOOKY MYSTERY with Holmes and Watson … but BEWARE OF THE DOG!

The world’s most famous detective, Sherlock Holmes, and his best buddy, John Watson, face their most curious case yet, when they investigate the mysterious death of Sir Charles Baskerville. Could it be linked to the ghostly hound that has haunted the family for centuries?

A thrilling tale of mystery, murder and things that go woof in the night.

Look out for more COMIC CLASSICS:

TREASURE ISLAND
Climb aboard with Jim Hawkins, a chatty parrot and a bunch of crazy pirates for a hilarious adventure across the seven seas.

Format: Paperback
Ageband: from 8
Release Date: 11/11/2021
Pages: 272
ISBN: 978-1-4052-9408-9
Jack Noel is a Jack of three trades: author, illustrator, designer, who works mainly on children's books and is a co-host on the Down the Rabbit Hole children's books podcast. In 1986 he won the Brighton Cooperative Beautiful Baby competition. Now Jack lives in London with his family and enjoys doodling in books belonging to dead Victorian gentlemen. One day he tweeted some spreads of Great Expectations in a funny middle grade style, and the rest is history!

'Buy a copy of Jack Noel’s retelling of Great Expectations before I set the dogs on you. Now, begone!', Philip Ardagh, Roald Dahl Funny Prize-winning author -

'It is BRILLIANT!', Jenny Pearson, author of The Super Miraculous Journey of Freddie Yates -

”'Jack Noel’s brilliantly witty art perfectly complements Dickens” - Great Expectations, making this a fab KS2 text to sit alongside the classic. Brilliant for dyslexic kids who may struggle with Dickens' prose . . . this book could bring a generation of kids to the classics', Abi Elphinstone, author of Rumblestar, Sky Song and the Dreamsnatcher trilogy