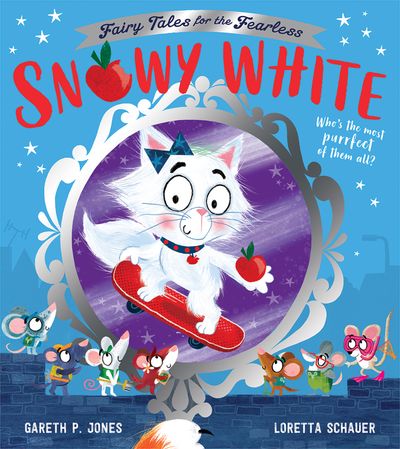 A fearless, fun-filled fairytale – perfect for any little reader who loves a twist in the tale!

* With a fabulously foiled cover! *

Kingsley is the finest cat in the kingdom. How does he know? His crystal ball tells him so!

But one day, the crystal ball has a different story to tell. A new cat by the name of Snowy White has arrived in the kingdom. She’s beautiful . . . she’s kind . . . and Kingsley is determined to get rid of her.

Luckily, though, Snowy gets a helping hand – or seven – from some very special new friends!

The third hilarious title in a fun-filled fairytale series with empowering messages for young readers!

Author: Gareth P. Jones
Format: Paperback
Ageband: 3 to 6
Release Date: 17/02/2022
Pages: 32
ISBN: 978-0-7555-0340-7
Gareth P. Jones is the author of the picture books The Lion on the Bus, The Dinosaurs are Having a Party! and Are You the Pirate Captain? He has penned a number of fiction titles for young readers, including The Dragon Detective Agency and Ninja Meerkats series, as well as The Considine Curse, winner of the Blue Peter Book of the Year Prize 2012Loretta Schauer is the illustrator of Beauty and the Beast, by Michael Morpurgo, A Monster's Moved In, by Timothy Knapman, and A Very Corgi Christmas, by Sam Hay, along with a number of fiction titles, including the Dougal Daley Series, by Jackie Marchant. She won the Waterstones 'Picture This' competition in 2011.