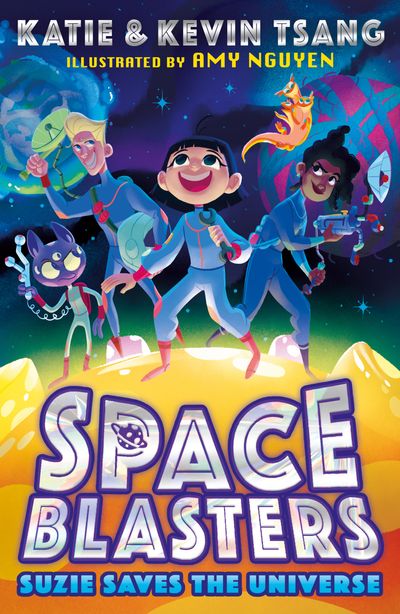 Save the universe in the awesome and hilarious new space-themed adventure series from bestselling authors Katie and Kevin Tsang!

Suzie Wen LOVES gadgets and inventing things – but her inventions don’t always turn out how she expects . . . And when Suzie invent the Super 3DTV Gizmo she ends up getting transported into her favourite TV show – Space Blasters! On board the space ship with Captain Jane, Spaceman Jack and alien with attitude Five-Eyed Frank, Suzie is soon exploring new planets – like the smelly Planet Cheddar – and meeting plenty of aliens. But when moons start disappearing, it’s up to Suzie to save the universe. Can she put her inventing skills to use? And will she ever get home?

Funny, accessible and highly illustrated stories, perfect for readers aged 6 and up and fans of Bunny vs Monkey, Grimwood, Kitty Quest – and space!

Author: Katie Tsang
Format: ebook
Ageband: 6 to 9
Release Date: 04/08/2022
Pages: None
ISBN: 978-0-00-852673-3
Katie and Kevin Tsang are bestselling children's authors. They met in 2008 while studying at the Chinese University of Hong Kong. Since then they have lived on three different continents and travelled to over 40 countries together. In addition to the SPACE BLASTERS series, they are the co-authors of the young fiction series SAM WU IS NOT AFRAID and the DRAGON REALM books. Katie also writes YA as Katherine Webber. They currently live in London with their young daughters.