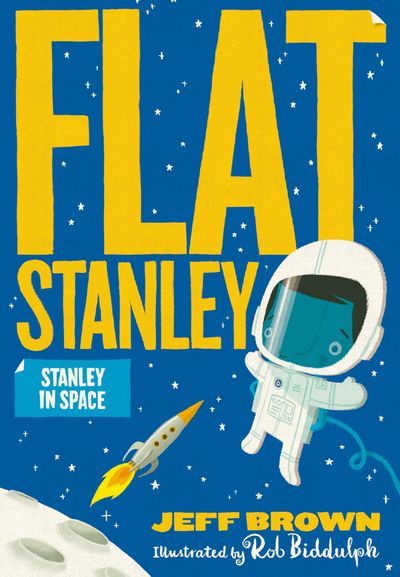 Stanley is now so famous the President of the United States calls him to send him on a special mission to space.

Life in space is exciting at first what with TV appearances and zero gravity. But soon the Lambchops start to worry that the journey is taking too long. And will the aliens be as friendly as the President has promised?

Format: Paperback
Ageband: from 6
Release Date: 08/03/2018
Pages: 112
ISBN: 978-1-4052-8809-5
Born in New York City, Jeff Brown was a story editor and assistant film producer in Hollywood. He worked on the editorial staffs of The New Yorker and the Saturday Evening Post, and his stories appeared in these magazines and many others. He died in Manhattan in 2003.Rob Biddulph is a bestselling and award-winning children’s book author and illustrator. He won the Waterstones Children’s Book Prize for Blown Away and was nominated for the Kate Greenaway medal for GRRRRR! These were followed by, Odd One Out (August 2016), Sunk! (March 2017) and Kevin (August 2017). Rob lives in London with his wife and three daughters.