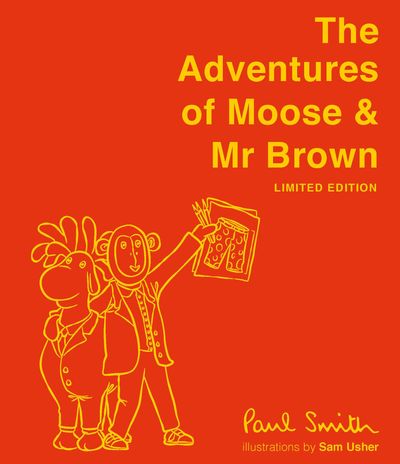 This is the renowned international fashion designer Sir Paul Smith’s very first children’s picture book – and the first book in a new and exciting series.

THIS BEAUTIFUL LIMITED GIFT EDITION FEATURES AN ART PRINT OF MOOSE AND MR BROWN NUMBERED AND SIGNED BY SIR PAUL SMITH AND SAM USHER AND A SPECIAL LINEN-BOUND EDITION OF THE BOOK, CONTAINED IN A LINEN CLAMSHELL BOX.

Written by Sir Paul and illustrated by the brilliant Sam Usher, this is a stunning, beautiful, laugh-out-loud story of animals, travel, design and finding inspiration in the most unlikely of places.

Inspired by toys that Paul has owned for many years, the main characters are Moose, a moose, and Mr Brown, a monkey who lives in Sir Paul’s office in London.

Mr Brown is an international fashion designer, who meets Moose on a plane travelling to London. Moose is distraught as he has lost his twin brother Monty – who got on the wrong plane! Mr Brown agrees to help Moose track Monty down, and in return, Moose helps bring even more inspiration to Mr Brown’s business.

They travel around the world, helping other animals with their designs (slippers for sloths, parkas for penguins, scarves for giraffes, and more) and looking for Monty. Will Mr Brown and Moose find Monty before Mr Brown’s big catwalk show?

Author: Paul Smith
Format: Hardback
Ageband: 5 to 7
Release Date: 24/10/2019
Pages: 40
ISBN: 978-1-84365-433-9
Sir Paul Smith is an internationally renowned fashion designer. The Paul Smith fashion company has flagship stores in London, Paris, New York, Milan and Tokyo, with a total of over 200 stores worldwide. It has a presence in over 70 countries.Sir Paul has collaborated with a number of well-known brands including Manchester United Football Team, Anglepoise, Land Rover, New Balance and Penguin Classics.Sam Usher has been shortlisted for the Waterstones Prize and the Red House Children’s Book Award and longlisted for the Kate Greenaway medal. He is particularly admired for his technical drawing skill and prowess with watercolour.