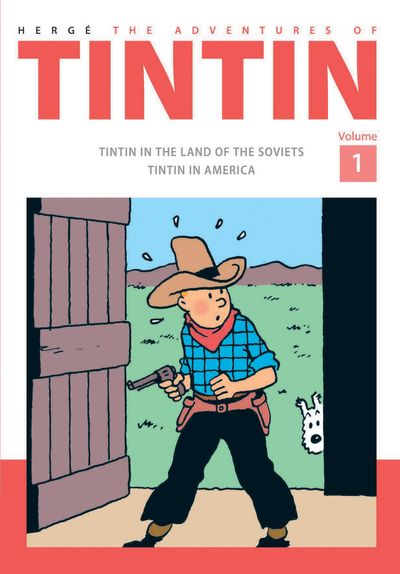 The Adventures of Tintin Volume 1

Join the world’s most famous travelling reporter in his exciting adventures as he travels behind the Iron Curtain in Tintin in the Land of the Soviets, and tangles with Al Capone in Tintin in America.

Accompanied by his dog Snowy, Tintin leaves Brussels to go undercover in Soviet Russia. His attempts to research his story are put to the test by the Bolsheviks and Moscow’s secret police …

Gangsters, Cowboys, Indians and the Big Apple await Tintin when he travels across the Atlantic to America. He soon finds himself in terrible danger – but with Snowy to help him, he faces it head on …

Join the most iconic character in comics as he embarks on an extraordinary adventure spanning historical and political events, and thrilling mysteries.

Still selling over 100,000 copies every year in the UK and having been adapted for the silver screen by Steven Spielberg and Peter Jackson in 2011, The Adventures of Tintin continue to charm more than 80 years after they first found their way into publication. Since then an estimated 230 million copies have been sold, proving that comic books have the same power to entertain children and adults in the 21st century as they did in the early 20th.

Author: Hergé
Format: Hardcover
Ageband: 8 to 12
Release Date: 29/02/2016
Pages: 208
ISBN: 978-1-4052-8275-8
Hergé (Georges Remi) was born in Brussels in 1907. His pseudonym comes from his initials backwards (R.G., as pronounced in French). Over the course of 54 years he completed 23 albums of The Adventures of Tintin series, which is now considered to be one of the greatest, if not the greatest, comics series of all time. With translations published in over 80 languages, more than 230 million copies sold worldwide and a Hollywood movie to its name, Tintin dominates the Comics and Graphic Novels chart even today. Sadly, Hergé died in 1983, leaving his 24th album, Tintin and Alph-Art, unfinished, but his hero continues to be one of the most iconic characters in both adult and children’s fiction.