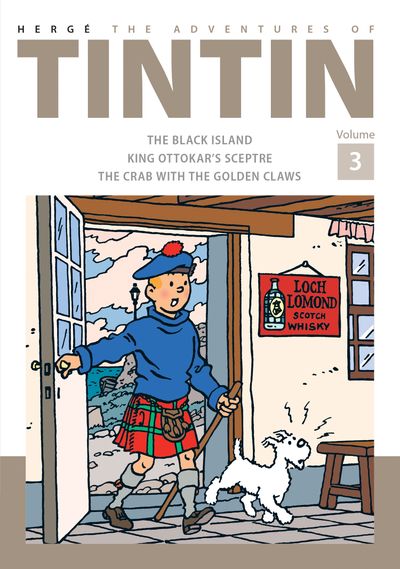 The Adventures of Tintin Volume 3

Join the world’s most famous travelling reporter in three exciting adventures as he visits the highlands of Scotland in The Black Island, solves a mysterious theft in King Ottokar’s Sceptre, and meets a certain Captain Haddock for the first time in The Crab with the Golden Claws.

The Black Island
Wrongly accused of a theft, Tintin is led to set out with Snowy on an adventure to investigate a gang of forgers.

King Ottokar’s Sceptre
Tintin travels to the Syldavia and uncovers a plot to dethrone King Muskar XII. But can he help the head of state before it’s too late?

The Crab with the Golden Claws
Faced with a drowned sailor, counterfeit coins and a ship full of opium, Tintin sets out on another adventure. Aboard the Karaboudjan, Tintin is introduced to Captain Haddock for the first time, and they are soon both facing a deathly thirst in the Sahara desert.

Author: Hergé
Format: Hardback
Ageband: 8 to 12
Release Date: 03/12/2015
Pages: 192
ISBN: 978-1-4052-8277-2
Hergé (Georges Remi) was born in Brussels in 1907. His pseudonym comes from his initials backwards (R.G., as pronounced in French). Over the course of 54 years he completed 23 albums of The Adventures of Tintin series, which is now considered to be one of the greatest, if not the greatest, comics series of all time. With translations published in over 80 languages, more than 230 million copies sold worldwide and a Hollywood movie to its name, Tintin dominates the Comics and Graphic Novels chart even today. Sadly, Hergé died in 1983, leaving his 24th album, Tintin and Alph-Art, unfinished, but his hero continues to be one of the most iconic characters in both adult and children’s fiction.