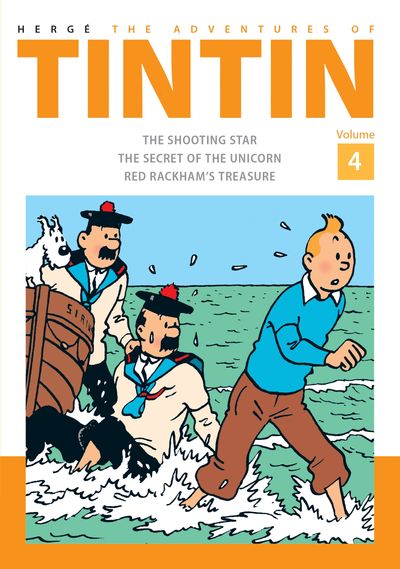 The Adventures of Tintin Volume 4

Join the world’s most famous travelling reporter in his exciting adventures as races to claim a mysterious meteorite in The Shooting Star, and uncovers a lost pirate’s hoard in the two-part story The Secret of the Unicorn and Red Rackham’s Treasure.

The Shooting Star
Things are hotting up for Tintin as a huge fireball comes hurtling towards earth! Soon he is setting sail with Captain Haddock to find the meteorite in the stormy Arctic Ocean, but a valuable metal is contained in the meteorite and Tintin’s attempts to reach it are met with relentless sabotage!

The Secret of the Unicorn
When Tintin stumbles across a model ship at the Old Street Market, he buys it as a gift for his friend Captain Haddock. But this isn’t just any old model ship … it’s the Unicorn. Built by one of Haddock’s ancestors it holds a clue to finding the treasure of a notorious pirate.

Red Rackham’s Treasure
Determined to find the treasure of the notorious pirate Red Rackham, Tintin and Captain Haddock set sail aboard the Sirius to find the shipwreck of the Unicorn. With the help of an ingenious shark-shaped submarine, Tintin follows the clues deep down on this ocean adventure.

Author: Hergé
Format: Hardback
Ageband: 8 to 12
Release Date: 03/12/2015
Pages: 192
ISBN: 978-1-4052-8278-9
Hergé (Georges Remi) was born in Brussels in 1907. His pseudonym comes from his initials backwards (R.G., as pronounced in French). Over the course of 54 years he completed 23 albums of The Adventures of Tintin series, which is now considered to be one of the greatest, if not the greatest, comics series of all time. With translations published in over 80 languages, more than 230 million copies sold worldwide and a Hollywood movie to its name, Tintin dominates the Comics and Graphic Novels chart even today. Sadly, Hergé died in 1983, leaving his 24th album, Tintin and Alph-Art, unfinished, but his hero continues to be one of the most iconic characters in both adult and children’s fiction.