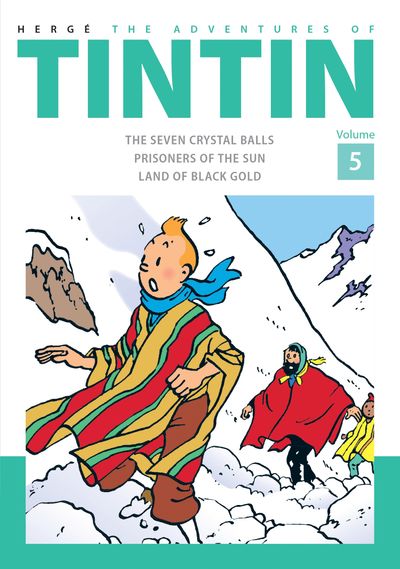 The Adventures of Tintin Volume 5

Join the world’s most famous travelling reporter in his exciting adventures as he braves an ancient Incan curse in the two-part story The Seven Crystal Balls and Prisoners of the Sun, and investigates espionage in the Middle East in Land of Black Gold.

The Seven Crystal Balls
The world’s most famous travelling reporter is faced with an ancient Incan curse, which is causing its victims to fall into a life-threatening coma. The tomb of Rascar Capac has been unearthed! But one by one, the finders fall into a terrifying coma. Can this be the curse of the Inca gods? Tintin must somehow fathom out the meaning behind his only clue: the shattered crystal ball lying beside each of the victims …

Prisoners of the Sun
When Professor Calculus is kidnapped, Tintin and a desperate Captain Haddock set off to Peru on a rescue mission, braving runaway train carriages, yellow fever and avalanches. Then they must find an ancient Inca tribe if they are to find their great friend.

Land of Black Gold
Boom! Doctored petrol is blowing up vehicles all around the country. Determined to find the culprits, Tintin heads for the Middle East, but he is in for a nasty shock when he encounters a familiar face in the desert.

Author: Hergé
Format: Hardback
Ageband: 8 to 12
Release Date: 03/12/2015
Pages: 192
ISBN: 978-1-4052-8279-6
Hergé (Georges Remi) was born in Brussels in 1907. His pseudonym comes from his initials backwards (R.G., as pronounced in French). Over the course of 54 years he completed 23 albums of The Adventures of Tintin series, which is now considered to be one of the greatest, if not the greatest, comics series of all time. With translations published in over 80 languages, more than 230 million copies sold worldwide and a Hollywood movie to its name, Tintin dominates the Comics and Graphic Novels chart even today. Sadly, Hergé died in 1983, leaving his 24th album, Tintin and Alph-Art, unfinished, but his hero continues to be one of the most iconic characters in both adult and children’s fiction.