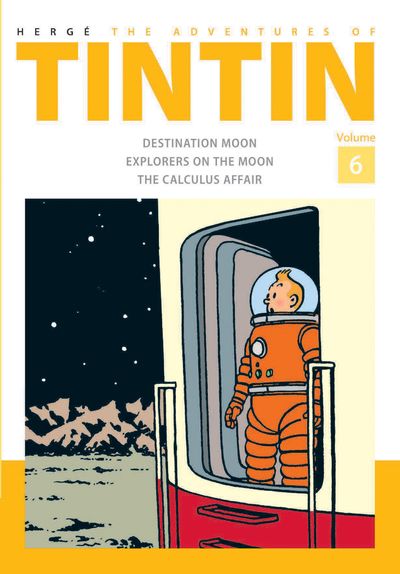 The Adventures of Tintin Volume 6

Join the world’s most famous travelling reporter in his exciting adventures as he embarks on his most epic journey in the two-part story Destination Moon and Explorers on the Moon, and sets out to rescue his friend the Professor in The Calculus Affair.

Destination Moon
Tintin and Captain Haddock are amazed to find that Professor Calculus is planning a top-secret project from the Sprodj Atomic Research Centre in Syldavia. And before our intrepid hero knows it, the next stop on this adventure is … space.

Explorers on the Moon
Following on from the events of Destination Moon, Tintin finds himself in a rocket on a collision course with the moon. And with Snowy the dog, Captain Haddock, Professor Calculus and the Thompson twins aboard, things quickly spiral further and further out of control.

The Calculus Affair
Windows, mirrors and chandeliers are spontaneously shattering and Tintin is left flummoxed. After a shooting and a break-in, Tintin knows Calculus is in danger, but he has only one clue – an unusual packet of cigarettes. He has a mystery to solve. But can he do it before a terrible weapon falls into the wrong hands?

Author: Hergé
Format: Hardback
Ageband: 8 to 12
Release Date: 03/12/2015
Pages: 192
ISBN: 978-1-4052-8280-2
Hergé (Georges Remi) was born in Brussels in 1907. His pseudonym comes from his initials backwards (R.G., as pronounced in French). Over the course of 54 years he completed 23 albums of The Adventures of Tintin series, which is now considered to be one of the greatest, if not the greatest, comics series of all time. With translations published in over 80 languages, more than 230 million copies sold worldwide and a Hollywood movie to its name, Tintin dominates the Comics and Graphic Novels chart even today. Sadly, Hergé died in 1983, leaving his 24th album, Tintin and Alph-Art, unfinished, but his hero continues to be one of the most iconic characters in both adult and children’s fiction.