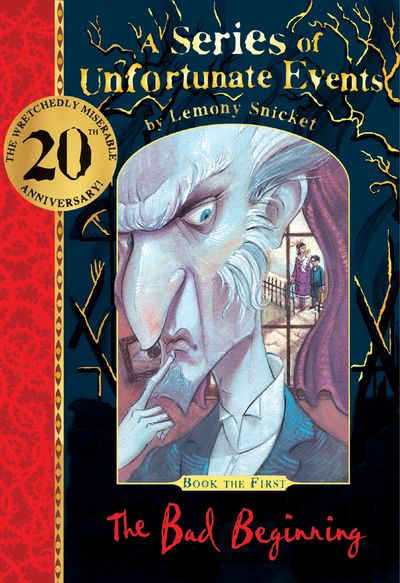 Lemony Snicket’s The Bad Beginning is the first book in the globally bestselling series A Series of Unfortunate Events. This exclusive gold foiled 20th anniversary hardback gift edition commemorates the miserable fact that every child in the world has wanted this brilliantly funny book for twenty years.

Perfect for fans of Roald Dahl and Mr Gum, young readers of 9 to 11 will adore the mischievously dark humour. Lemony Snicket’s ‘A Series of Unfortunate Events’ has been made into a blockbuster Hollywood film starring Jim Carrey and is also a hit Netflix TV series. Now with new anniversary blurb by the mysterious author himself.

For the past twenty years, my books have been upsetting the countless readers who have been foolish enough to begin to read them. The three Baudelaire siblings and their lives of misery and woe have now been responsible for more than two decades of weeping. From the very first page of this book, when the children are at the beach and receive terrible news, to the last page, when something goes wrong at the worst possible moment, disaster strikes Violet, Klaus and Sunny wherever they go.

In this short book alone, the three youngsters encounter a greedy and repulsive villain, itchy clothing, a disastrous fire, a plot to steal their fortune, and cold porridge for breakfast.

I have spent the last twenty years writing down these unpleasant details so that they might be available to the general public, but there is nothing stopping the general public, or you, from putting this book down at once and reading something less upsetting, if you prefer that sort of thing.

With all due respect,
Lemony Snicket

And what about All the Wrong Questions? In this four-book series a 13-year-old Lemony chronicles his dangerous and puzzling apprenticeship in a mysterious organisation that nobody knows anything about:

‘Who Could That Be at This Hour?’
‘When Did you Last See Her?’
‘Shouldn’t You Be in School?’
‘Why is This Night Different from All Other Nights?’

Author: Lemony Snicket
Format: Hardback
Ageband: 9 to 11
Release Date: 07/01/2021
Pages: 192
ISBN: 978-0-7555-0032-1
Lemony Snicket was born before you were and is likely to die before you as well. He was born in a small town where the inhabitants were suspicious and prone to riot. He grew up near the sea and currently lives beneath it. Until recently, he was living somewhere else. A studied expert in rhetorical analysis, Mr Snicket has spent the last several eras researching the travails of the Baudelaire orphans.Lemony Snicket published his first book in 1999 and has not had a good night's sleep since. He is the author of quite a few books, all dreadful, and has been falsely accused of many crimes, all falsely. Once the recipient of several distinguished rewards, he is now an escapee of several indistinguishable prisons. He is widely regarded as one of the most difficult children's authors to capture and imprison. There are thirteen books in the globally bestselling A Series of Unfortunate Events, which should be avoided at all costs.Until recently, Lemony Snicket was presumed to be 'presumed dead'. Instead, this 'presumed' presumption wasn't disproved not to be incorrect. Most things written about him are not true, but this is.Brett Helquist was born in Ganado, Arizona, grew up in Orem, Utah, and now lives in New York City. He earned a bachelor’s degree in fine arts from Brigham Young University and has been illustrating ever since. His art has appeared in many publications, including Cricket magazine and The New York Times.

‘Perhaps A Series of Unfortunate Events is so special simply because Handler saw children as people. He took his readers seriously', Guardian -