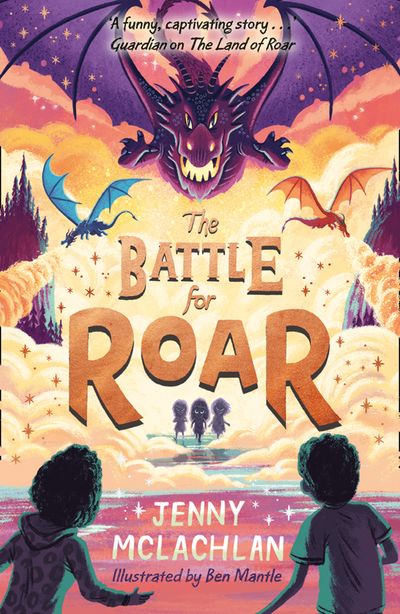 The final book in the epic and bestselling children’s fantasy series that will make you believe in magic … Perfect for fans of Cressida Cowell’s How to Train Your Dragon, Michelle Harrison’s A Pinch of Magic, as well as classic children’s fantasy adventures, Narnia and Jumanji.

Rose and Arthur are back in Roar, on a voyage that takes them further than they’ve ever been before: beyond The End.

It’s an amazing adventure – full of secrets, surprises and fairies with fangs – but then a mysterious storm changes everything.

Shipwrecked on a strange island, they make a shocking discovery … Could this be the end of Roar?

Jenny McLachlan is the author of several acclaimed teen novels including Flirty Dancing, Stargazing for Beginners and Truly, Wildly, Deeply. Before Jenny became a writer, she was Head of English in a secondary school; she now loves visiting schools as an author and delivering funny and inspiring talks and workshops. The Land of Roar series is Jenny’s debut for readers of 8-12.

Ben Mantle began his illustration career early, picking up his first award in a local library colouring-in competition aged seven. Ben has illustrated a number of children’s books and is the creator of the award-winning The Best Birthday Present Ever! . Ben lives and works in Brighton.

Author: Jenny McLachlan
Format: Paperback
Ageband: 8 to 12
Release Date: 08/07/2021
Pages: 336
ISBN: 978-1-4052-9814-8
Jenny McLachlan is the bestselling author of The Land of Roar trilogy – a world of imagination and adventure for readers of 9+ that has captured young readers hearts everywhere. Before Jenny became a writer, she was a teacher and Head of English in a secondary school; she now loves visiting schools as an author and delivering funny and inspiring talks and workshops. When Jenny isn’t thinking about stories or writing stories, she enjoys living by the seaside, cycling and running over the South Downs.Ben Mantle began his illustration career early, picking up his first award in a local library colouring-in competition aged seven. He went on to study Animation at the Surrey Institute of Art & Design before working as an animator. Ben has illustrated many award-winning children’s books. He lives and works in Brighton.

This funny, captivating story is filled with the painful pangs of growing up and the transporting qualities of imagination', Imogen Russell-Williams, Guardian -

'This is proof, not that it’s needed, that Jenny McLachlan is a writer of enormous heart and versatility. I’m a really big fan', award-winning author, Phil Earle -

'Roar is an exhilarating, hilarious, vividly drawn tribute to the power of the childhood imagination, the love of family and the magic we risk losing as we grow up. If you plan to visit one new place in 2019, make it Roar', Sarah Driver, author of The Huntress trilogy -