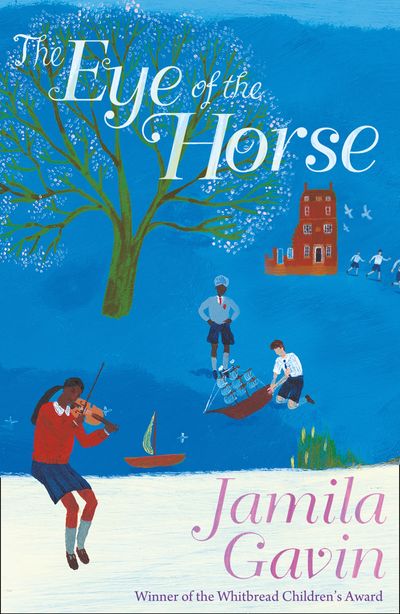 The Eye of the Horse

India 1948. “The light has gone out of our world.… Mahatma Gandhi is assassinated. In India, chaos and turmoil reign. In England, Jaspal and Marvinder’s father is in prison. Jaspal cannot forgive him, and longs to return to his village in the Punjab where he feels he belongs. Marvinder has found friends, her first love, and her gift as a violinist. But how can she ignore her mother’s voice calling her back to India? She is torn between two worlds.

A story of thesearch for reconciliation, the sequel to Wheel of Surya is a beautifullycrafted story sets against the backdrop of Indian independence and thePartition of India and Pakistan. No children’s books about India conveysthese issues and themes with the effortless ease of Jamila Gavin. Her diversevoice is the perfect introduction to this period of history, for fansof The Bone Sparrow, Morris Gleitzman’s Once, and KatherineRundell’s The Wolf Wilder.

Author: Jamila Gavin
Format: ebook
Ageband: from 11
Release Date: 03/05/2018
Pages: None
ISBN: 978-1-4052-9279-5
Jamila was born in Mussoorie (Bombay), India, in the foothills of the Himalayas. Her Indian father and English mother met as teachers in Iran and by the age of eleven she had lived in an Indian palace in the Punjab, a flat in a bombed-out street in Shepherd’s Bush, a bungalow in Poona, near Mumbai, and a terraced house in Ealing. She settled into a little town cottage in Stroud, Gloucestershire twenty five years ago but she still loves to travel. She won the Whitbread Children’s Book of the Year award with her book Coram Boy in 2000.

”'Jamila Gavin is one of our greatest writers” - - S.F. Said