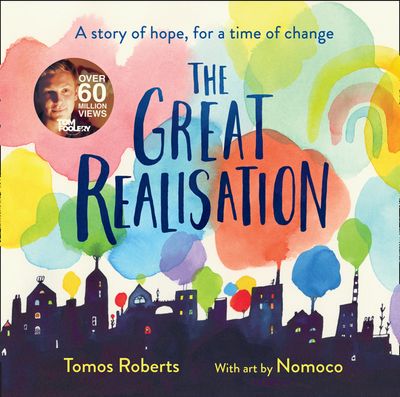 The Great Realisation: The post-pandemic poem that has captured the hearts of millions

We now call it The Great Realisation
and, yes, since then there have been many.
But that’s the story of how it started …
and why hindsight’s 2020.

First performed online in response to the Covid-19 pandemic, Tomos Roberts’ heartfelt poem, with its message of hope and resilience, has been viewed over 60 million times and translated into over 20 languages.

Adapted by Ashley Banjo and Diversity into a BAFTA-winning dance performance for Britain’s Got Talent!

Written in the form of a bedtime story, The Great Realisation is a celebration of the many things – from simple acts of kindness, to applauding the heroic efforts of our key workers – that have brought us together at a time of global crisis. It captures, with magical resonance, the thoughts and feelings of millions in lockdown, as we adapted to a new way of life, found joy in unexpected places, cast aside old habits and reflected on what truly matters to us.

The Great Realisation is a timely reminder that, even during our most challenging moments, there is always hope.

Tomos’s second book, The World Awaits, was published in July 2021 and he was commissioned by the Royal British Legion to write an Armistice Day poem, Alive With Poppies, which he performed at the Royal Albert Hall in commemoration of 100 years of the poppy. He wrote a Christmas poem, ‘I Actually, Love London’ for BBC London in December 2021.

‘This fairytale-style story provides a springboard for discussion of current events with children, and presents a more optimistic view of the future in a time where the outlook often seems bleak’ – School Library Journal, US

Author: Tomos Roberts (Tomfoolery)
Format: ebook
Ageband: from 4
Release Date: 03/09/2020
Pages: None
ISBN: 978-0-7555-0157-1
Tomos Roberts (Tomfoolery) is a spoken-word poet and filmmaker, born in New Zealand and brought up in London. His online poem The Great Realisation, launched in April 2020 and has been viewed over 60 million times. Tomos has been interviewed on This Morning, by Phillip Schofield and Holly Willoughby, and his story has been reported all over the world. His second picture book, The World Awaits published in July 2021, and he was commissioned by the Royal British Legion to write an Armistice Day poem, Alive With Poppies, which he performed at the Royal Albert Hall. Tomos lives in London.Nomoco is the illustrator of the Greenaway Medal-nominated Once Upon a Raindrop, also shortlisted for the UKLA Award Information Books category. She has produced artwork for clients including Moschino, Marc Jacobs, the Guardian and the New York Times, as well as being exhibited all over the globe. She lives in Tokyo.