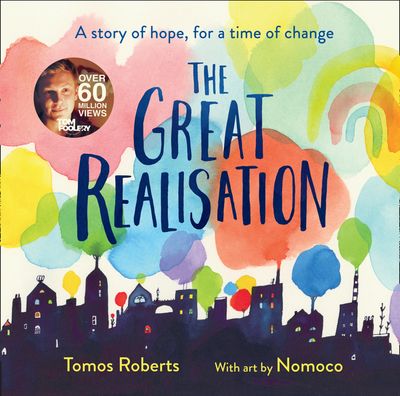 The Great Realisation: The post-pandemic poem that has captured the hearts of millions: Unabridged edition

We now call it The Great Realisation
and, yes, since then there have been many.
But that’s the story of how it started …
and why hindsight’s 2020.

First performed online in response to the Covid-19 pandemic, Tomos Roberts’heartfelt poem, with its message of hope and resilience, has been viewed over 60 million times, translated into over 20 languages.

Now available as an audio edition!

Written in the form of a bedtime story, The Great Realisation is a celebration of the many things – from simple acts of kindness, to applauding the heroic efforts of our key workers – that have brought us together at a time of global crisis. It has captured, with magical resonance, the thoughts and feelings of millions in lockdown, as we adapt to a new way of life, find joy in unexpected places, cast aside old habits and reflect on what truly matters to us.

The Great Realisation is a story for any reader, young or old, who dares to dream of a brighter future – of a fairer, kinder, more sustainable world. It is a timely reminder that, even during our most challenging moments, there is always hope.

Author: Tomos Roberts (Tomfoolery)
Format: Digital Audiobook
Ageband: from 4
Release Date: 03/09/2020
Pages: None
ISBN: 978-0-7555-0183-0
Detailed Edition: Unabridged edition
Tomos Roberts (Tomfoolery) is a spoken word poet, performer and filmmaker, born in New Zealand and brought up in London. He launched his YouTube platform on 22 March 2020 and, just five weeks later, uploaded a performance of‘The Great Realisation', featuring a cameo from his seven-year-old brother. The video has since been viewed over 60 million times. Tomos has been interviewed on This Morning, by Phillip Schofield and Holly Willoughby, and his story has been reported all over the world, including in the Daily Mail and the Washington Post. Celebrities including Jennifer Aniston, Kristen Bell, Drew Barrymore, Khloé Kardashian and Jake Gyllenhaal have praised his heartfelt work. Tomos lives in London.Nomoco is a Japanese artist and illustrator, whose joyful artwork has been publishing and exhibited all over the globe. Nature and sound are key inspirations for her work, which is realised in a range of different media, including inks, silkscreen and lithography. Nomoco is the illustrator of Once Upon a Raindrop, written by James Carter, which was nominated for the Kate Greenaway Medal 2020 as well as being shortlisted for the UKLA Award 2020, Information Books category. She has produced artwork for clients as varied as the Royal School of Music, the Guardian, the New York Times, Moschino, Marc Jacobs and Pocko. She lives in Tokyo.