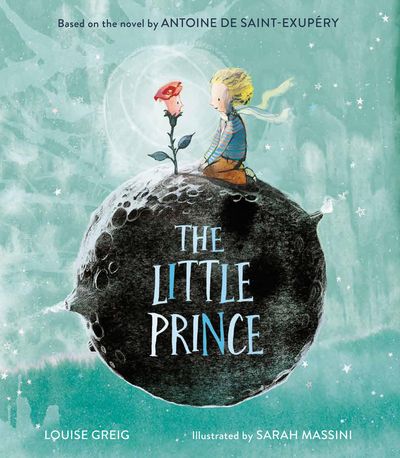 Please – draw me a sheep.

The voice belonged to a charming little prince.

The characters of Antoine de Saint-Exupéry’s classic tale have captured the hearts of generations of readers. Meet the pilot stranded in the desert. Meet the Little Prince who tends his beautiful rose on a planet of his own. Follow him as he embarks on a strange and wonderful journey to puzzling new planets and finally to Earth, where he discovers the nature of love.

‘Will enchant little ones’ – The Times

‘Brilliant and beautiful’ – The Scotsman

Adapted by award-winning poet Louise Greig, author of the Greenaway-medal-nominated Sweep and The Night Box, with enchanting new artwork from the critically acclaimed illustrator of The Velveteen Rabbit and Star in the Jar.

Author: Antoine de Saint-Exupery
Format: Hardback
Ageband: 3 to 6
Release Date: 09/12/2021
Pages: 32
ISBN: 978-1-4052-8812-5
Louise Greig is an award-winning poet and children's author. Her debut book, The Night Box, was nominated for the Greenaway Medal and shortlisted for the Klaus Flugge Prize, the Waterstones Children's Book Prize, the Association of Illustrators Awards and the Teach Primary Book Awards.Sarah Massini has always had a passion for drawing, which has seen her working in corporate design, children’s book design and now illustration. She has many award-winning picture books to her name, including Star in the Jar and The Velveteen Rabbit.Antoine de Saint-Exupéry was born in 1900. A plane crash in the Sahara Desert inspired his classic The Little Prince.

”'It’s never too soon to hear that we don’t know what we’ve got till it’s gone, and this pair (and the spirit of Saint-Exupéry) land that message in style.” - - Alex O’Connell, The Times

”’Retaining the essence of the original story, but pairing it back enough to make it accessible to children makes its key messages shine through. The Little Prince is as charming as ever, and Massini’s artwork superbly captures the surreal world he inhabits. Perfect for curious young readers, it’s a story that will stay with them long after the final page has turned.” - - The Scotsman

”'A thing of beauty, mysterious and poetic both verbally and visually.” - - Red Reading Hub

”'Contemporary but timeless illustrations, a perfect way to bring a classic to the next generation” - - @bookgiftblogger