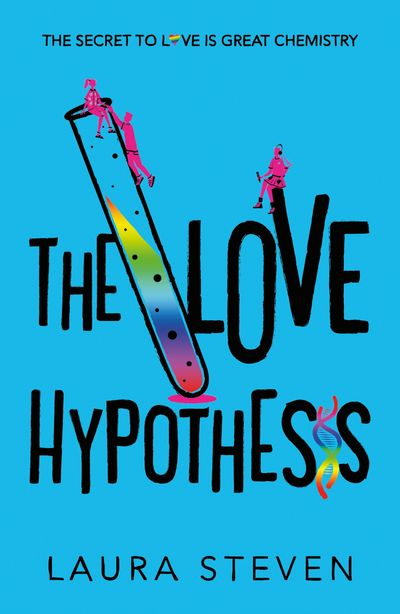 An LGBT romantic comedy with a twist from the Comedy Women in Print prize winner Laura Steven, author of The Exact Opposite of Okay. A hilarious love story with bite, for fans of Sex Education, Booksmart, Becky Albertalli’s Love, Simon and Jenny Han’s To All The Boys I’ve Loved Before.

Physics genius Caro Kerber-Murphy knows she’s smart. With straight As and a college scholarship already in the bag, she’s meeting her two dads’ colossal expectations and then some. But there’s one test she’s never quite been able to ace: love. And when, in a particularly desperate moment, Caro discovers a (definitely questionable) scientific breakthrough that promises to make you irresistible to everyone around you, she wonders if this could be the key.

What happens next will change everything Caro thought she knew about chemistry – in the lab and in love. Is hot guy Haruki with her of his own free will? Are her feelings for her best friend some sort of side-effect? Will her dog, Sirius, ever stop humping her leg?

Laura is the author of fiercely funny feminist comedy The Exact Opposite of Okay and its sequel, A Girl Called Shameless. The Exact Opposite of Okay was a bestselling young adult debut in 2018 and won the inaugural Comedy Women in Print prize, founded by Helen Lederer, from a shortlist including Gail Honeyman’s Eleanor Oliphant is Completely Fine and Why Mummy Swears by Gill Sims.

Praise for The Exact Opposite of Okay:

‘Laura Steven simultaneously destroyed the patriarchy and made me laugh so hard I choked. I will protect Izzy O’Neill with my life.’ Becky Albertalli, author of Love, Simon

Author: Laura Steven
Format: ebook
Ageband: from 14
Release Date: 05/03/2020
Pages: None
ISBN: 978-1-4052-9695-3
Laura Steven is an author, journalist and screenwriter from the northernmost town in England. She has an MA in Creative Writing and works at a non-profit organisation supporting women in the creative arts. Her TV pilot, Clickbait, was a finalist in British Comedy's 2016 Sitcom Mission. The Exact Opposite of Okay is her first book for young adults.