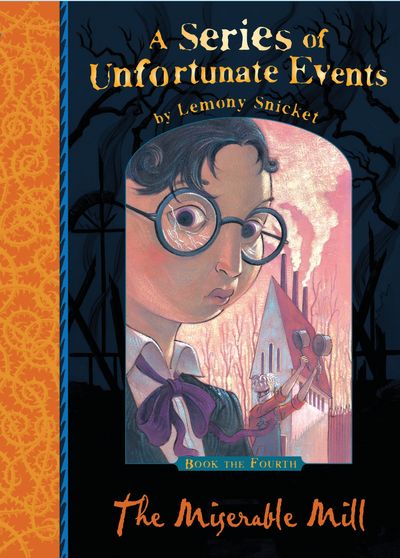 There is nothing to be found in Lemony Snicket’s A Series of Unfortunate Events but misery and despair. You still have time to choose another international best-selling series to read. But if you insist on discovering the unpleasant adventures of the Baudelaire orphans, then proceed with caution…

Violet, Klaus, and Sunny Baudelaire are intelligent children. They are charming, and resourceful, and have pleasant facial features. Unfortunately, they are exceptionally unlucky.

In The Miserable Mill the siblings encounter a giant pincher machine, a bad casserole, a man with a cloud of smoke where his head should be, a hypnotist, a terrible accident and coupons.

In the tradition of great storytellers, from Dickens to Dahl, comes an exquisitely dark comedy that is both literary and irreverent, hilarious and deftly crafted.

Despite their wretched contents, A Series of Unfortunate Events has sold 60 million copies worldwide and been made into a Hollywood film starring Jim Carrey. And in the future things are poised to get much worse, thanks to the forthcoming Netflix series directed by Barry Sonnenfeld. You have been warned.

And what about All The Wrong Questions? In this four-book series a 13-year-old Lemony chronicles his dangerous and puzzling apprenticeship in a mysterious organisation that nobody knows anything about:

‘Who Could That Be at This Hour?’

‘When Did you Last See Her?’

Lemony Snicket was born before you were and is likely to die before you as well. He was born in a small town where the inhabitants were suspicious and prone to riot. He grew up near the sea and currently lives beneath it. Until recently, he was living somewhere else.

Brett Helquist was born in Ganado, Arizona, grew up in Orem, Utah, and now lives in New York City. He earned a bachelor’s degree in fine arts from Brigham Young University and has been illustrating ever since. His art has appeared in many publications, including Cricket magazine and The New York Times.

Author: Lemony Snicket
Format: Paperback
Ageband: 8 to 12
Release Date: 03/09/2012
Pages: 224
ISBN: 978-1-4052-6609-3
Lemony Snicket was born before you were and is likely to die before you as well. He was born in a small town where the inhabitants were suspicious and prone to riot. He grew up near the sea and currently lives beneath it. Until recently, he was living somewhere else. A studied expert in rhetorical analysis, Mr Snicket has spent the last several eras researching the travails of the Baudelaire orphans.Lemony Snicket published his first book in 1999 and has not had a good night's sleep since. Mr Snicket is the author of quite a few books, all dreadful, and has been falsely accused of many crimes, all falsely. Once the recipient of several distinguished rewards, he is now an escapee of several indistinguishable prisons.He is widely regarded as one of the most difficult children's authors to capture and imprison. There are thirteen books in the A Series of Unfortunate Events, which should be avoided at all costs. Until recently, he was presumed to be 'presumed dead'. Instead, this 'presumed' presumption wasn't disproved not to be incorrect. Most things written about him are not true, but this is.