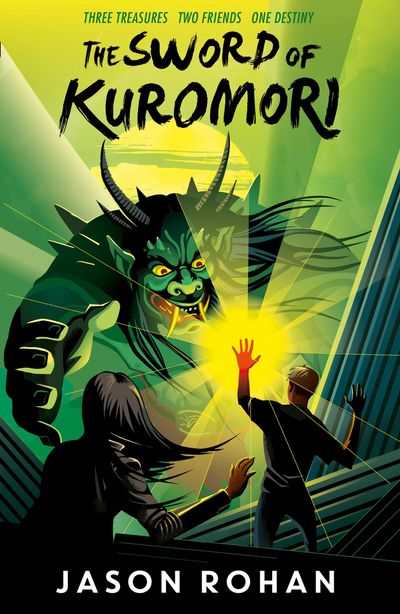 The Matrix meets Percy Jackson in this exciting series packed with monsters, magic and mayhem, set in modern day Japan.

Kenny Blackwood arrives in Tokyo to spend the summer with his father and is stunned to discover a destiny he had never dreamed of when he finds himself in the middle of a hidden war that is about to explode.

Racing against an impossible deadline, Kenny must find the fabled Sword of Heaven and use it to prevent the disaster. But a host of terrifying monsters is out to destroy him, and success will come at a price.

With clever, fearless, sarcastic Kiyomi at his side, Kenny must negotiate the worlds of modern and mythic Japan to find the lost sword, before it’s too late.

Look out for the sequel: The Shield of Kuromori.

Jason Rohan has worked as a staff writer for Marvel Comics in New York and as an English teacher in Japan, where he lived for five years. He returned to the UK and now lives in West London with his wife and five children.

Author: Jason Rohan
Format: ebook
Ageband: 10 to 12
Release Date: 08/05/2014
Pages: None
ISBN: 978-1-78031-457-0
When he was sixteen, Jason blagged his way into Marvel Comics in New York and landed a gig as an intern, during which time he made his first professional sale – a Captain America story which his editor bought either through pity or to stop him pestering.

'An awesome load of fast-paced action and adventure. I found it hard to put down from start to finish!'', LoveReading4Kids -