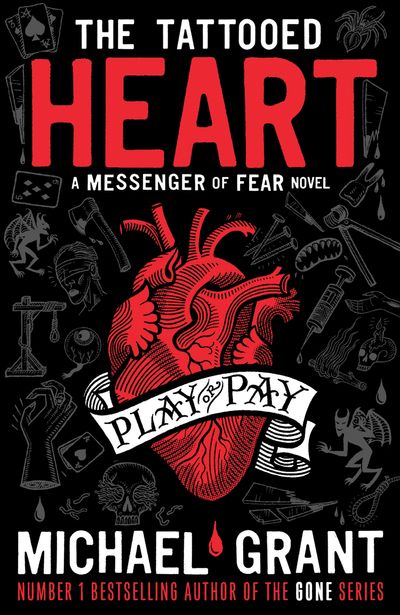 ‘Be afraid … this book gave me chill after chill’ – R. L. Stine on Messenger of Fear.

I wanted to touch the boy who was not to be touched.

The Messenger of Fear exists to punish the wicked, to restore balance in a world where evil seems to be everywhere. He offers sinners one terrible choice: play … or pay? If you win the game, you can go free. But if you lose, you must live out your greatest fear.

His assistant, Mara is still adjusting to her role. She must face the worst horrors of intolerance, cruelty and injustice: she, as much as any of the people Messenger pursues, is being punished. But Mara has secret feelings for Messenger, and they’re threatening to overpower her. As she learns more about his tragic past, she must make her own choice: how far will she go to gain her heart’s desire?

This enthralling sequel to Messenger of Fear promises just as many heart stopping moments as its predecessor. These books contain all the thrills and surprises that you know to expect from the Man who brought you the GONE series. Fans of Tom Hoyle’s Thirteen will love this.

Praise for GONE: ‘These are exciting, high-tension stories told in a driving, torrential narrative that never lets up … This is great fiction.’ Stephen King.

Michael Grant has lived an exciting, fast-paced life. He moved in with his wife Katherine after only 24 hours. He has co-authored over 160 books but promises that everything he writes is like nothing you’ve ever read before!

Author: Michael Grant
Format: ebook
Ageband: from 12
Release Date: 27/08/2015
Pages: None
ISBN: 978-1-78031-260-6
Michael Grant is the evil genius of Young Adult Fiction. Among his biggest fans is Stephen King who called the GONE series ‘A driving, torrential narrative’. Michael has now written around 150 books (with Katherine, as himself, under pseudonyms and as a ghostwriter).He now lives in the San Francisco Bay area taking his inspiration from his charming view of Alcatraz. From across those dark waters have emerged his dystopian fantasy series, GONE, his thrilling futuristic trilogy BZRK, and the menacing Messenger of Fear. As well as reinventing history with his Front Lines series, and revisiting the world of GONE with MONSTER and VILLAIN.