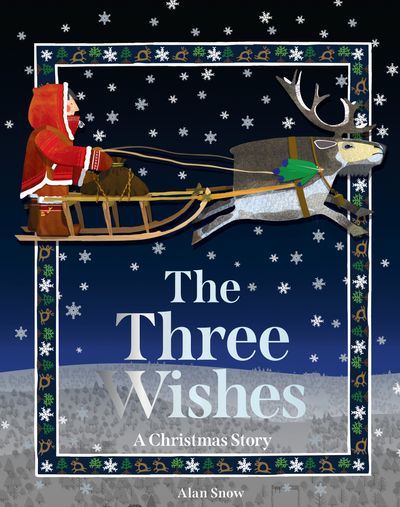 The Three Wishes: A Christmas Story

A beautiful, fresh take on a classic tale, once read it will become a family Christmas tradition forever.

Coming together like a perfect festive jigsaw, this story explains all of the traditions and myths around Santa Claus, from how he travels around the world in one night, how his sleigh and reindeer can fly, and why he leaves presents, to the origins of his red coat.

A young boy is herding his family’s reindeer when they are drawn into a mysterious cave. The cave is the holder of eternal summer, looked after by three strange characters – a wooden creature, a bird and a fish. Once entered, the cave cannot be left without time in the outside world standing still. In his sadness at not being able to leave, the boy is granted three wishes and chooses freedom, happiness and time. He is told that they will all be granted – eventually.

Format: Paperback
Ageband: 7 to 9
Release Date: 03/11/2022
Pages: 48
ISBN: 978-1-84365-511-4
Alan Snow is an award-winning children’s book illustrator and designer who has worked on more than 160 books. His novel, Here Be Monsters (OUP, 2005), was made into an animated film, The Boxtrolls, which spent several weeks at the top of the UK box office in 2015. Alan has won numerous awards for his work as a children’s book illustrator as well as for design and computer animation.