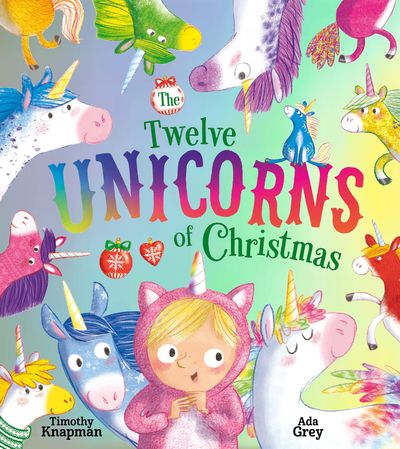 The Twelve Unicorns of Christmas

Christmas, counting and UNICORNS in one magical picture book – the must-have gift to add to your list for Santa! With a shiny rainbow foil cover!

One little girl is counting down to Christmas with her unicorn friend. There’s lots to do before Christmas day, but her unicorn is a bit mischievous … He munches all the mince pies, scribbles on the Christmas cards, makes a lot of mess and when the carol singers arrive, cover your ears, because unicorns REALLY can’t sing!

But as the big day grows closer and closer, will the two friends get their Christmas wish?

Join in the song and count each gift on the page as you go along, ending with a grand festive finale full of unicorn celebrations. Full of humour, warmth and family fun, this is the perfect picture book for fans of Oscar the Hungry Unicorn and Ten Minutes To Bed Little Unicorn.

Author: Timothy Knapman
Format: Paperback
Ageband: 3 to 6
Release Date: 17/10/2019
Pages: 32
ISBN: 978-1-4052-9527-7
Tim Knapman writes plays, musicals, songs and children’s books and has been published by Simon & Schuster, Puffin, Macmillan, Scholastic, Hachette, Egmont UK and many more. His previous books include the bestselling Dinosaurs in the Supermarket, Dinosaurs Don’t Have Bedtimes and Superhero Dad. His books have been translated into 20 languages and several have been read on CBeebies bedtime stories. Tim has done more than 100 events and readings in schools, colleges, bookshops, fairs, libraries and festivals. He lives in Sussex and his hobbies include swashbuckling.Ada Grey studied illustration and later took a role in design. Moving back into illustration, Ada set about designing her own unique picture book style, characterised by an energetic palate, adorable, lively characters and a delicate use of texture. Her books include School for Dads, Shhh! Don't Wake the Royal Baby, Poo in the Zoo and Hippobottymus. She has illustrated several books for Bloomsbury, Little Tiger, Egmont and Macmillan.