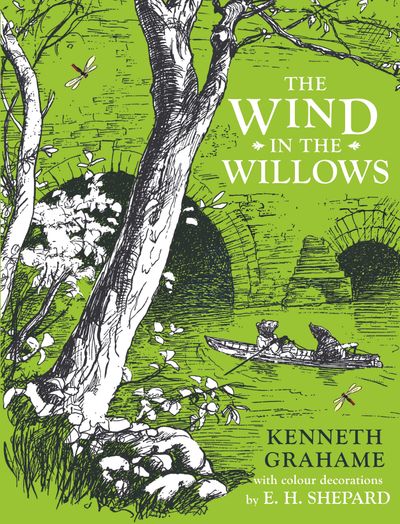 The Wind in the Willows

One of the most famous animal stories of all time, The Wind in the Willows is a classic that has been entertaining children and adults alike for over a hundred years.

Kenneth Grahame’s The Wind in the Willows is a classic animal adventure that charms and enthrals. This hardback edition contains the original full-colour illustrations by E H Shepard, a partnership that has never been bettered. A perfect gift for children aged 9 and above.

Author: Kenneth Grahame
Format: Hardback
Ageband: from 6
Release Date: 05/03/2020
Pages: 224
ISBN: 978-1-4052-9782-0
KENNETH GRAHAME was born in Edinburgh in 1859 and grew up in Berkshire. He started work at the Bank of England in 1879 and retired as its Secretary in 1908, the year that The Wind in the Willows was first published. The book was based on bedtime stories he told his son Alistair, who is said to have been the inspiration for the much-loved character of Toad.E.H. SHEPARD was born in London in 1879. He won a scholarship to the Royal Academy Schools and later worked for Punch magazine as a cartoonist and an illustrator. Shepard illustrated many books for adults and children, including A.A. Milne's Winnie-the-Pooh. Shepard’s characterful illustrations of Mole, Ratty, Badger and Toad, first published in 1931, have become an inseparable part of The Wind in the Willows, and are classics in their own right.