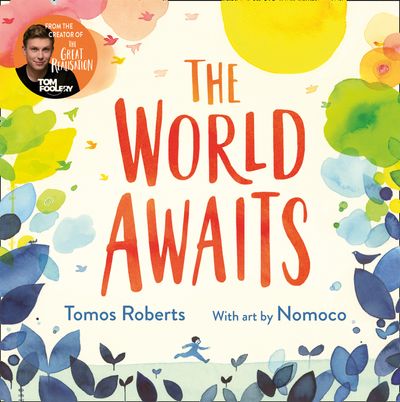 The second inspiring picture book from the creators of The Great Realisation.

‘All the things that make life wonderful, all the colours, sounds and tastes
Begin to lose a touch of magic when your goodness goes to waste.’

We all have within us ‘potential’, an amount of positivity and goodness that we could add to the world if we only try.

But what if we don’t try? What if it all seems too much and we just feel like staying in bed?

As one little boy lies in bed one morning, not wanting to face the day, it’s up to his older brother to show him the extraordinary potential within him and how even the smallest of his actions will make the world a better place . . .

Tomos Roberts’ sparkling new picture book is a manifesto for our time – urging us all to come together to build a brighter future, one small step at a time.

Tomos Roberts’ pandemic poem, The Great Realisation, was viewed over 60 million times online and translated into over 20 languages. It was adapted by Ashley Banjo and Diversity into a BAFTA-winning dance performance for Britain’s Got Talent as well as being featured in the official BBC New Years Eve 2021 fireworks spectacular. The picture book adaptation has been nominated for the Kate Greenaway Medal.

Tomos was commissioned by the Royal British Legion to write an Armistice Day poem, Alive With Poppies, which he performed at the Royal Albert Hall in commemoration of 100 years of the poppy. He wrote a Christmas poem, ‘I Actually, Love London’ for BBC London in December 2021.

Author: Tomos Roberts (Tomfoolery)
Format: Paperback
Ageband: 4 to 7
Release Date: 20/12/2022
Pages: 32
ISBN: 978-0-00-849892-4
Tomos Roberts (Tomfoolery) is a spoken-word poet and filmmaker, born in New Zealand and brought up in London. His online poem The Great Realisation, launched in April 2020 and has been viewed over 60 million times. Tomos has been interviewed on This Morning, by Phillip Schofield and Holly Willoughby, and his story has been reported all over the world. His second picture book, The World Awaits published in July 2021, and he was commissioned by the Royal British Legion to write an Armistice Day poem, Alive With Poppies, which he performed at the Royal Albert Hall. Tomos lives in London.Nomoco is the illustrator of the Greenaway Medal-nominated Once Upon a Raindrop, also shortlisted for the UKLA Award Information Books category. She has produced artwork for clients including Moschino, Marc Jacobs, the Guardian and the New York Times, as well as being exhibited all over the globe. She lives in Tokyo.