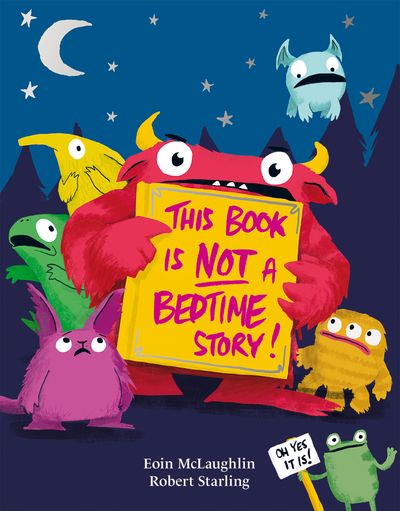 This Book is Not a Bedtime Story

This book is NOT a bedtime story.

It’s scary, strange and rather gory.

This book won’t. It’s much too CREEPY.

Except it isn’t… this book is told by a group of monsters who think they’re very scary, but in fact they’re not – they’re cute and cuddly. They try their hardest to scare you – in a haunted house, creepy wood, ghostly ship and darkest dark, but each time they fail! The problem is, these monsters aren’t at all spooky. They’re a bit silly, actually. And a bit cuddly. In fact, they share the insecurities and worries of us humans and all they want is a cosy, snoozy good night’s sleep.

Despite the title of this book it really is a bedtime story. A brilliant tale that reassures children, makes them laugh and gets them ready for a peaceful night’s sleep.

Author: Eoin McLaughlin
Format: Paperback
Ageband: 3 to 6
Release Date: 01/10/2020
Pages: 32
ISBN: 978-1-84365-438-4
Eoin McLaughlin was born in Ireland, and lives in London. Along the way he has written several books that include Secret Agent Elephant and The Hug. He is adept at wittering, okay at whittling and terrible at whistling. He wants to write stories that make children wet themselves with laughter.Rob Jones began doodling at school and hasn't stopped since. He lives and works in Norwich, and when he's not sketching up new characters or writing down stories he can be found sculpting, brewing coffee or foraging in the kitchen for cake. Oh, and teaching kids.He was shortlisted for The Waterstones Children's Book Prize in 2018 for his debut book, Fergal is Fuming.