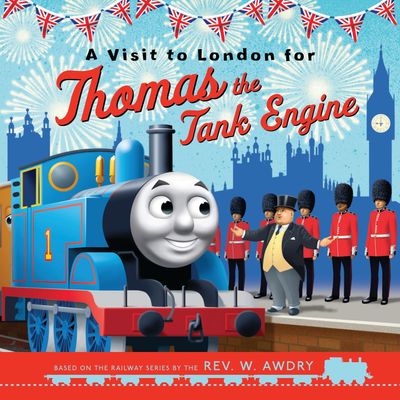 Join Thomas the Tank Engine on a royal adventure as he attends the Queen’s birthday celebrations.

The Fat Controller has been invited to the Queen’s birthday party, far from the Island of Sodor, in the biggest city in the land, London. And what better engine to take him there than Thomas the Tank Engine.

A delighted Thomas makes the long journey to London where he is put on a barge and taken down the Thames seeing Tower Bridge, St Paul’s, The Shard, Parliament and many other landmarks along the way. Toddlers will delight in discovering the delights of London with their favourite engine.

It’s a very proud day for the little blue engine in the big city and a perfect accompaniment to the Queens’s 90th birthday celebrations. Great for toddlers aged 2 and up.

Format: Paperback
Ageband: 1 to 5
Release Date: 07/04/2016
Pages: 32
ISBN: 978-1-4052-8126-3
The Thomas the Tank engines stories were created by the Reverend Wilbert Awdry, who was born in Hampshire in 1911. He grew up close to the railway and was convinced that the steam engines all had different personalities. He used to imagine conversations between them. Later when he was grown up and his son Christopher became ill with measles, Wilbert told stories Thomas the Tank Engine and his friends to entertain him. Christopher asked for more and more stories and Wilbert began writing them down. The first of the Railway Series books was published in 1945, and Awdry wrote 26 Railway books in total before his son, Christopher, took over the series. There have since been multiple, hugely popular, Thomas the Tank Engine TV series and films.