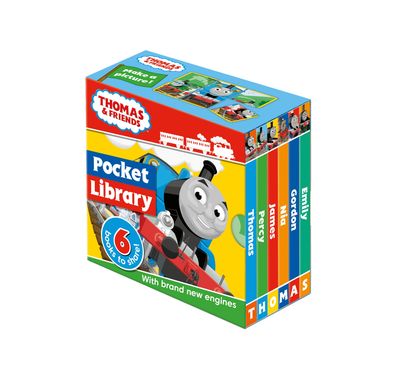 This fantastic slipcase collection of 6 little board storybooks brings together Thomas, James, Percy, Emily, Gordon and their new friend, Nia.

This newly-updated Thomas & Friends Pocket Library is the perfect size for young children to enjoy here, there and everywhere. It features the best-loved stories of Thomas, James and Percy from the original library plus three brand new stories about Gordon, Emily and Nia. This set is small enough to carry with you, so the books can be used to entertain children wherever you go. Children will also love placing the book back covers in the right order to reveal a big picture of Thomas and his friends.

The Thomas and Friends Pocket Library is a great collection for young children to enjoy again and again.

Format: Board Book
Ageband: 1 to 5
Release Date: 10/01/2019
Pages: 60
ISBN: 978-1-4052-9300-6
The Thomas the Tank engines stories were created by the Reverend Wilbert Awdry, who was born in Hampshire in 1911. He grew up close to the railway and was convinced that the steam engines all had different personalities. He used to imagine conversations between them. Later when he was grown up and his son Christopher became ill with measles, Wilbert invented the Thomas stories to entertain him. Christopher kept asking for more stories and Wilbert began writing them. The first of the Railway series books was published in 1945. Awdry wrote 26 Railway books in total before his son, Christopher, took over the series. There have since been multiple, hugely popular Thomas TV series. The latest is released in 2018 and sees the engines travelling the world!