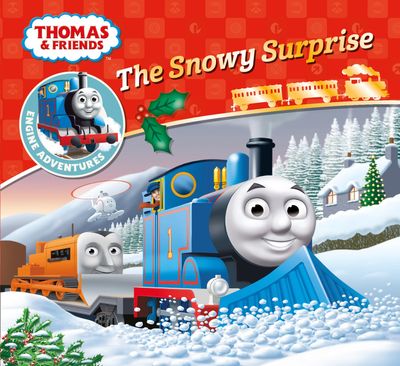 It’s Christmas time on the Island of Sodor. But when a huge wintry snowstorm leaves one mountain town stranded, can Thomas and Percy team up to bring a happy Christmas to everyone in the village? This festive Christmas book is perfect for children ages 3, 4 and 5.

Engine Adventures is the newest series in the Thomas Range. Children will love meeting Thomas and his engine friends. From Thomas to Gordon to Harold the Helicopter, there is a railway adventure to thrill every Thomas fan. These fun, short stories come with a fun, bonus spot-and-see activity at the end.

Thomas has been teaching children lessons about lift and friendship for 75 years. He ranks alongside other beloved characters such as Paddington Bear, Winnie the Pooh and Peter Rabbit as an essential part of our literary heritage.

Look out for more books in the Thomas Engine Adventures series:

Format: Paperback
Ageband: 1 to 5
Release Date: 07/09/2017
Pages: 32
ISBN: 978-1-4052-8770-8
The Thomas the Tank engine stories were created by the Reverend Wilbert Awdry, who was born in Hampshire in 1911. He grew up close to the railway and was convinced that the steam engines all had different personalities. He used to imagine conversations between them. Later when he was grown up and his son Christopher became ill with measles, Wilbert told stories Thomas the Tank Engine and his friends to entertain him. Christopher asked for more and more stories and Wilbert began writing them down. The first of the Railway Series books was published in 1945, and Awdry wrote 26 Railway books in total before his son, Christopher, took over the series. There have since been multiple, hugely popular, Thomas the Tank Engine TV series and films.