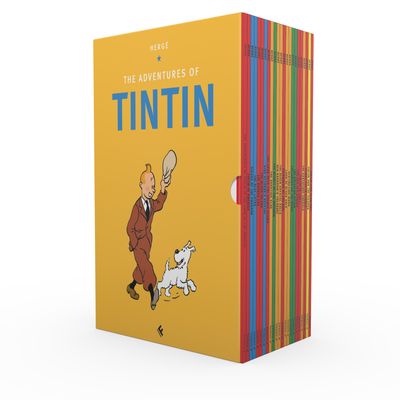 For the first time, you can own all 23 stories in The Adventures of Tintin series in this fantastic boxed set. This is the perfect present for Tintin fans of all ages.

Published to celebrate 90th anniversary of Tintin in 2019.

The complete set of The Adventures of Tintin, presented in a wonderful box set, ideal as a gift for any fan of the world’s most famous travelling reporter.

Stories included in the set:
Tintin in the Land of the Soviets
Tintin in America
Cigars of the Pharaoh
The Blue Lotus
The Broken Ear
The Black Island
King Ottokar’s Sceptre
The Crab with the Golden Claws
The Shooting Star
The Secret of the Unicorn
Red Rackham’s Treasure
The Seven Crystal Balls
Prisoners of the Sun
Land of Black Gold
Destination Moon
Explorers on the Moon
The Calculus Affair
The Red Sea Sharks
Tintin in Tibet
The Castafiore Emerald
Flight 714 to Sydney
Tintin and the Picaros
Tintin and Alph-Art