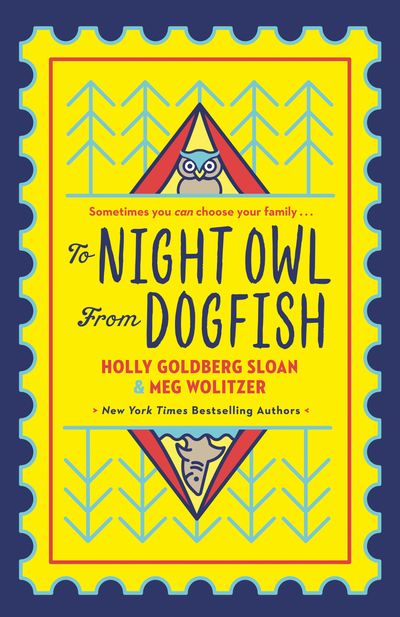 To Night Owl From Dogfish

Avery (Night Owl) is bookish, intense, likes to plan ahead, and is afraid of many things. Bett (Dogfish) is fearless, outgoing, and lives in the moment. What they have in common is that they are both twelve years old, and their dads are dating each other.

Bett and Avery are sent, against their will, to the same camp for the summer vacation. Their dads hope that they will find common ground and become friends – and possibly, one day, even sisters.

Against all odds, the girls soon can’t imagine a life without each other. But when the worst happens, and their dads break up, Avery and Bett must figure out a way to get them to fall in love again. Is keeping a family together as easy as they think it is?

From two extraordinary authors comes this moving, exuberant, laugh-out-loud novel about friendship and family, told entirely in emails and letters.

Holly Goldberg Sloan was born in Ann Arbor, Michigan and is the author of the New York Times bestsellers Counting by 7s and Short, among other novels. After graduating from Wellesley College and spending some time as an advertising copywriter, she began writing family feature films, including Angels in the Outfield and Made in America.

Meg Wolitzer is the New York Times bestselling author of The Interestings, The Uncoupling, The Ten-Year Nap, The Position, The Wife (recently a major feature film), and Sleepwalking. She is also the author of the young adult novel Belzhar. Wolitzer lives in New York City.

To Night Owl From Dogfish