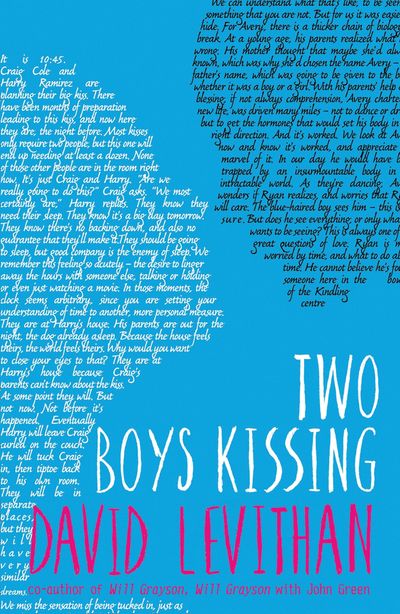 From the New York Times best-selling author of Every Day, comes a touching, thoughtful and deeply romantic look at love and discovering your true self.

Author: David Levithan
Format: ebook
Ageband: from 12
Release Date: 27/03/2014
Pages: None
ISBN: 978-1-78031-198-2
David Levithan was not born in France, Milwaukee or Olympia, Washington. He did not go to Eton, Harvard Law School or Oxford University. He is not the author of War and Peace, Hollywood Wives: The New Generation or The Baby-sitters Club #8: Boy-crazy Stacey. He has not won the Newbery Medal, the Pulitzer Prize, the Bausch & Lomb Science Award or the race for eleventh-grade vice president. He currently does not live in Manhatten.

”'You have to read this.” - —Rainbow Rowell, bestselling author of Eleanor & Park and Carry On

The Washington Post, August 20, 2013:'Over the years, Levithan has consistently explored new creative territory…'Two Boys Kissing' reveals his command of an intriguing, complex narrative with an unusual point of view that is rare (and refreshing) in YA literature.' -

”The Wall Street Journal Speakeasy, October 24, 2013:''Two Boys Kissing” - couldn’t have arrived at a more timely moment. Levithan seems to intuitively understand this generation—and his new book allows him to bring their particular struggles and joys to life.'

Starred Review, Publishers Weekly, June 3, 2013:'A landmark achievement from a writer and editor who has helped create, in literature, a haven for queer youth.' -

”'No one does heart-pulling emotion like Levithan, and this book, coming a decade after his groundbreaking debut, 'Boy Meets Boy,' has special resonance.” - Gayle Forman, author of Just One Day and Just One Year, for Bookish.com

”'Brilliant, moving, important, and wise.” - Jennifer E. Smith, author of This Is What Happy Looks Like and The Statistical Probability of Love at First Sight

Kirkus Reviews, July 15, 2013:'The novel has genuine moments of insight and wisdom…Inspiring.' -

Hypable.com, August 23, 2013:'Two Boys Kissing by David Levithan takes the stories of all these boys and spins them into an interconnecting web that will leave you emotionally exhausted and absolutely thrilled to have read something so beautiful and unique…Will educate, entertain and move you.' -