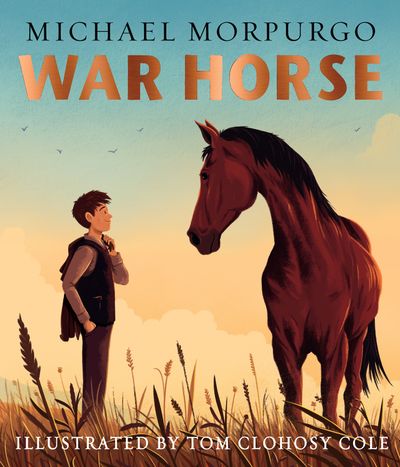 This powerful book for younger readers tells the enduring story of a friendship between a boy and his horse amid the turmoil of the First World War. For 40 years, War Horse has been helping children understand conflict. As we move beyond centenary commemorations and continue to strive for peace across the world, it remains an important book for young readers learning about the past.

Review for the novel:
War Horse is a story of universal suffering for a universal audience by a writer who ‘has the happy knack of speaking to both child and adult readers’ – Guardian

Michael Morpurgo has written more than one hundred books for children and won the Whitbread Award, the Smarties Award, the Circle of Gold Award, the Children’s Book Award and has been short-listed for the Carnegie Medal four times.

Author: Michael Morpurgo
Format: Hardcover
Ageband: 5 to 8
Release Date: 07/06/2022
Pages: 48
ISBN: 978-1-4052-9244-3
Michael Morpurgo has written over one hundred books and won many awards. In 1976 he and his wife Clare started the charity Farms For City Children, which aims to relieve the poverty of experience of young children from inner city and urban areas. In 1999 they were awarded the MBE for their work and in 2006 Michael received an OBE. His novel War Horse has been adapted into a critically acclaimed West End play. A former Children's Laureate, Michael is a tireless champion for children's books. His other books include Private Peaceful and Kensuke's Kingdom.Tom Clohosy Cole is an Illustrator living and working in London. Over the last 8 years, he’s worked on illustrated picture books, alongside commercial illustration work. He also works in animation as a background artist, storyboarder and sometimes director. His clients include Penguin, Puffin Classics, Macmillan, the Guardian, the New York Times, The Barbican, Wagamama and many more.