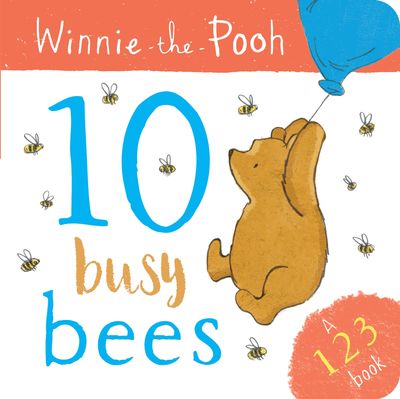 An essential counting board book for your toddler’s growing library.

Join Winnie-the-Pooh and friends in 10 Busy Bees. Toddlers will love this chunky board that takes them from 1 to 10 with recognisable objects and characters. With simple text and gorgeous illustrations, this first concept book is perfect for curious pre-schoolers and the youngest fans of Winnie-the-Pooh.

As 1 hungry bear joins up with 2 brave friends they hunt down these 10 ever so buzzy busy bees!

Format: Board Book
Ageband: from 1
Release Date: 14/05/2020
Pages: 28
ISBN: 978-1-4052-9641-0
Based on the Winnie-the-Pooh works by A. A. Milne and E. H. Shepard. A.A. Milne was born in London in 1882 and became a successful playwright and poet. He based Winnie-the-Pooh, Piglet and friends on the real nursery toys of his son, Christopher Robin, and published the first of their adventures in 1926. Since then, Pooh has become a world-famous bear, and Milne’s stories have been translated into sixty-two languages. E.H. Shepard was born in London in 1879. He was a cartoonist and illustrator and went on to draw the original illustrations to accompany Milne’s classic stories, earning him the name ‘the man who drew Pooh’.