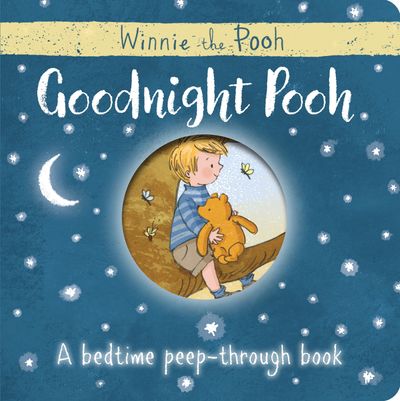 Christopher Robin outside in the wood,

Sweetly the sun sets, just as it should.

Peep through, Winnie-the-Pooh! What do you see inside?

Winnie-the-Pooh is getting ready for bed, in this delightful rhyming story with peep-through holes to play peepo!

Join Pooh and his friends from the Hundred Acre Wood in a cosy bedtime story. Young Winnie-the-Pooh fans will love this bright and colourful storybook with sturdy board pages that’s ideal for reading and sharing together.

Milne’s classic children’s stories – featuring Piglet, Owl, Rabbit, Eeyore and, of course, Pooh himself – are both heart-warming and funny, teaching lessons of friendship and reflecting the power of a child’s imagination like no other story before or since.

Pooh ranks alongside other beloved character such as Paddington Bear and Peter Rabbit as an essential part of our literary heritage.

Format: Board Book
Ageband: 1 to 5
Release Date: 04/05/2017
Pages: 12
ISBN: 978-1-4052-8618-3
Based on the ‘Winnie-the-Pooh’ stories by A.A.Milne decorated by E.H.Shepard. A.A.Milne was born in London in 1882 and later became a highly successful writer of plays, poems and novels. He based Winnie-the-Pooh, Piglet and friends on the real nursery toys of his son Christopher Robin and published the first of their adventures together in 1926. Since then, Pooh has become a world-famous bear, and Milne’s stories have been translated into seventy-two languages.E.H.Shepard was born in London in 1879. He was a cartoonist and artist, and went on to draw the original decorations to accompany Milne’s classic stories, earning him the name ‘the man who drew Pooh’.