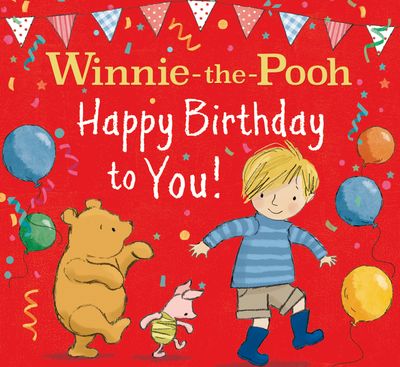 WINNIE-THE-POOH HAPPY BIRTHDAY TO YOU!

Winnie-the-Pooh Happy Birthday to You! is the ideal book to help children of all ages celebrate their birthday.

It is a beautifully illustrated birthday story featuring Pooh and all his friends and it includes instructions to make your very own paper boat and play a ‘pin the tail on Eeyore’ party game too!

One day, Pooh woke up with an excited feeling in his tummy that Christopher Robin tells him is a ‘birthday feeling’. This is wonderful because everyone knows birthdays mean parties, games and best of all, cake!

Soon, Pooh and his friends are busy making special things for the birthday celebration. It’s not until they’re about to sing happy birthday, that they realise they don’t actually know whose birthday it is …

This sweet storybook is a fantastic birthday present – it’s a great alternative to sugary treats or plastic toys!

Enjoy celebrating your special day with Winnie-the-Pooh and all his friends.

Do you own all the classic Winnie-the-Pooh titles?

Author: Winnie-the-Pooh
Format: Paperback
Ageband: 1 to 5
Release Date: 09/06/2022
Pages: 32
ISBN: 978-0-7555-0416-9
This book is inspired by the characters created by A.A.Milne and the iconic decorations created by E.H.Shepard. A.A.Milne was born in London in 1882 and became a highly successful writer of plays, poems and novels. He based Winnie-the-Pooh, Piglet and friends on the real nursery toys of his son Christopher Robin and published the first book of their adventures together in 1926. Since then, Pooh has become a world-famous bear, and Milne’s stories have been translated into seventy-two languages.E.H.Shepard was born in London in 1879. He was an artist, illustrator and cartoonist and went on to draw the original decorations to accompany Milne’s classic stories, earning him the name ‘the man who drew Pooh’.