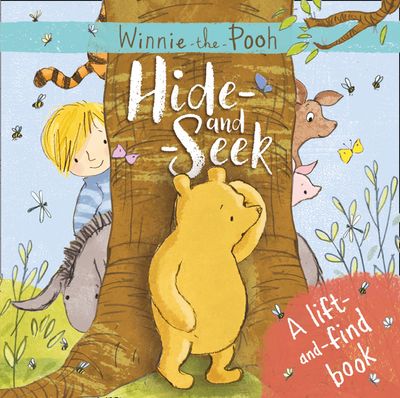 Have lots of lift-the-flap fun with Winnie-the-Pooh!

Join in as Pooh plays hide and seek with his friends in the Hundred Acre Wood. There are clues to help young children guess which animal friend is hidden behind each flap and once they’ve found them, there’s also a counting question to continue the fun.

Young children will love the appealing images and the book is the perfect size for them to move the flaps themselves, in order to reveal the hidden friends. There are lots of details in the images, so parents and carers can ask the child to find or count more things, or ask what colour they are, etc, so there’s plenty of scope for soft learning whilst sharing the book together.

With a simple narrative and appealing artwork, the Winnie-the-Pooh Hide & Seek lift-the-flap book is perfect for children aged 10 months and over and makes a lovely addition to any nursery bookshelf.

Format: Board Book
Ageband: 1 to 5
Release Date: 27/06/2019
Pages: 20
ISBN: 978-1-4052-9314-3
Based on the ‘Winnie-the-Pooh’ works by A. A. Milne and E. H. Shepard. A.A.Milne was born in London in 1882 and later became a highly successful writer of plays, poems and novels. He based Winnie-the-Pooh, Piglet and friends on the real nursery toys of his son Christopher Robin and published the first of their adventures together in 1926. Since then, Pooh has become a world-famous bear, and Milne’s stories have been translated into seventy-two languages. E.H.Shepard was born in London in 1879. He was a cartoonist and artist, and went on to draw the original decorations to accompany Milne’s classic stories, earning him the name ‘the man who drew Pooh’.