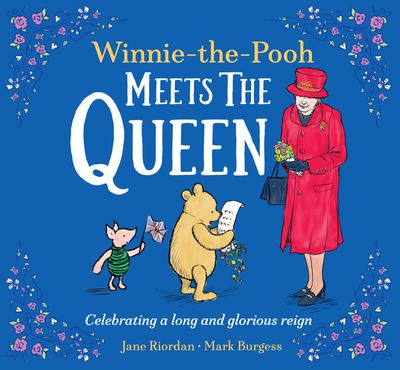 Winnie the Pooh Meets the Queen

The ultimate gift for the year of the Queen’s Platinum Jubilee. In this beautifully illustrated children’s picture book, Winnie-the-Pooh keeps a very special appointment at Buckingham Palace.

“It’s the Queen. The Queen is coming.”

When Winnie-the-Pooh sets off for Buckingham Palace, London with Christopher Robin, Piglet and Eeyore to deliver a special hum in honour of Her Majesty Queen Elizabeth II, he never dares to imagine that he might actually meet the Queen.

This picture book is wonderful gift for the whole family and a commemorative keepsake of the Queen’s remarkable 70 year reign and the Platinum Jubilee celebration.

Pooh ranks alongside other beloved characters such as Paddington Bear, and Peter Rabbit as an essential part of our literary heritage.

Author: Jane Riordan
Format: Paperback
Ageband: from 5
Release Date: 12/05/2022
Pages: 32
ISBN: 978-0-00-855841-3
Jane Riordan originally trained to be a primary school teacher but her love of children’s books led to a career in publishing. Since then, she has edited and written countless books for children, most notably Winnie-the-Pooh Goes to London and Winnie-the-Pooh Once There Was a Bear.This story is written in the style of the original Winnie-the-Pooh stories by A.A.Milne with illustrations created by Mark Burgess, that echo E.H.Shepard’s iconic original decorations. Mark Burgess has illustrated countless classic children’s characters including Paddington Bear and Winnie-the-Pooh. He also designs greetings cards, web sites, animations and special warm places for his cat to sleep. He lives in Somerset.

‘No Jubilee would be complete without Winnie-the-Pooh, who first appeared in print in 1926, the year the Queen was born.’, The Telegraph, Best Jubilee Books to Buy for Children. -