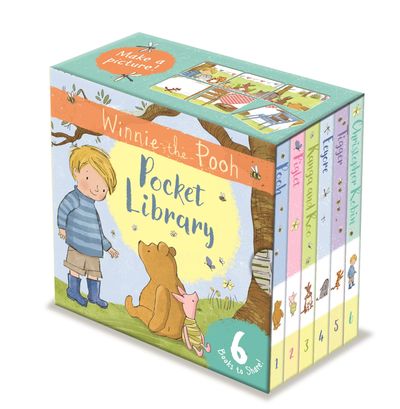 Winnie-the-Pooh can travel with you wherever you go with this mini pocket library containing six sweet books!

Each book in this little library introduces one of A.A.Milne’s beloved characters from the Hundred Acre Wood including Pooh, Piglet, Eeyore, Kanga, Rabbit and Christopher Robin. Beautifully illustrated in a young, nursery style, inspired by the original decorations by E.H.Shepard.

It’s perfect for little hands and suitable for children aged 10 months and up.

Milne’s classic children’s stories – featuring Piglet, Eeyore, Christopher Robin and, of course, Pooh himself – are both heart-warming and funny, teaching lessons of friendship and reflecting the power of a child’s imagination like no other story before or since.

Author: A. A. Milne
Format: Board Book
Ageband: 2 to 5
Release Date: 11/01/2018
Pages: 8
ISBN: 978-1-4052-8909-2
Based on the ‘Winnie-the-Pooh’ stories by A.A.Milne decorated by E.H.Shepard. A.A.Milne was born in London in 1882 and later became a highly successful writer of plays, poems and novels. He based Winnie-the-Pooh, Piglet and friends on the real nursery toys of his son Christopher Robin and published the first of their adventures together in 1926. Since then, Pooh has become a world-famous bear, and Milne’s stories have been translated into seventy-two languages.E.H.Shepard was born in London in 1879. He was a cartoonist and artist, and went on to draw the original decorations to accompany Milne’s classic stories, earning him the name ‘the man who drew Pooh’.

Winnie-the-Pooh can travel with you wherever you go with this mini pocket library containing six sweet books!