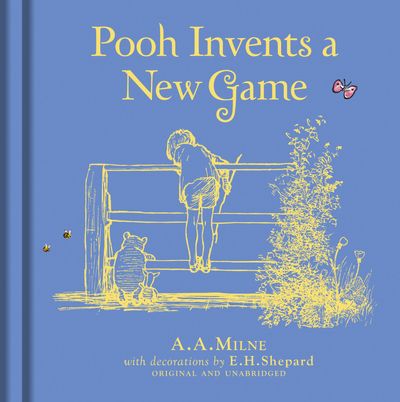 When Winnie-the-Pooh and his friends are playing Poohsticks one day, they’re most surprised to see a calm, dignified Eeyore floating out beneath the bridge …

This story first appeared in A.A.Milne’s The House at Pooh Corner, accompanied by E.H.Shepard’s original decorations.

This book is all the more special due to E.H.Shepard’s decorations, which are shown in full, glorious colour. They are truly iconic and contributed to him being known as ‘the man who drew Pooh’.

Winnie-the-Pooh: Eeyore Has a Birthday

Winnie-the-Pooh: A House is Built for Eeyore

Author: A. A. Milne
Format: Hardback
Ageband: 5 to 9
Release Date: 09/03/2017
Pages: 48
ISBN: 978-1-4052-8612-1
A.A.Milne was born in London in 1882 and became a highly successful writer of plays, poems and novels. He based Winnie-the-Pooh, Piglet and friends on the real nursery toys of his son Christopher Robin and published the first book of their adventures together in 1926. Since then, Pooh has become a world-famous bear, and Milne’s stories have been translated into seventy-two languages.E.H.Shepard was born in London in 1879. He was an artist, illustrator and cartoonist and went on to draw the original decorations to accompany Milne’s classic stories, earning him the name ‘the man who drew Pooh’.

Winnie-the-Pooh: The Complete Collection of Stories and Poems by A.A.Milne was named #1 in a list of the 20 Greatest Mental Health Books, Happiful magazine -