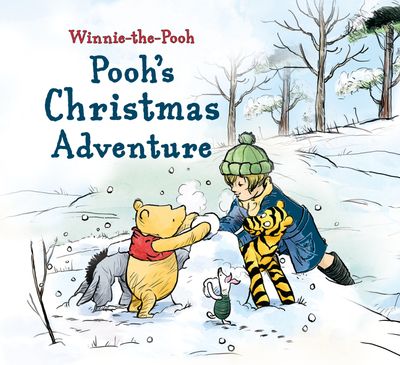 The perfect Christmas stocking filler for fans of Winnie-the-Pooh, the Bear of Very Little Brain.

It’s a very snowy day in the Hundred Acre Wood, and Pooh Bear realises that some of the other animals might be snowed in their houses. With the help of Piglet, he determines to help all of the other animals clear the snow away – and then it’s time for a Little Something! After all that, there’s just enough time for Christopher Robin to show them all how to make a snowman.

A marvellous Christmas adventure with Winnie-the-Pooh, Piglet, Eeyore and the rest of the gang that will make children feel all warm inside – while it’s cold outside.

Milne’s classic children’s stories – featuring Tigger, Piglet, Eeyore, Christopher Robin and, of course, Pooh himself – are both heart-warming and funny, teaching lessons of friendship and reflecting the power of a child’s imagination like no other story before or since.

Pooh ranks alongside other beloved characters such as Paddington Bear, and Peter Rabbit as an essential part of our literary heritage. Whether you’re 5 or 55, Pooh is the bear for all ages.

Format: Paperback
Ageband: 2 to 5
Release Date: 08/09/2016
Pages: 32
ISBN: 978-1-4052-8191-1
Based on the ‘Winnie-the-Pooh’ stories by A.A.Milne with decorations in the style of E.H.Shepard. A.A.Milne was born in London in 1882 and later became a highly successful writer of plays, poems and novels. He based Winnie-the-Pooh, Piglet and friends on the real nursery toys of his son Christopher Robin and published the first of their adventures together in 1926. Since then, Pooh has become a world-famous bear, and Milne’s stories have been translated into seventy-two languages.E.H.Shepard was born in London in 1879. He was a cartoonist and artist, and went on to draw the original decorations to accompany Milne’s classic stories, earning him the name ‘the man who drew Pooh’.