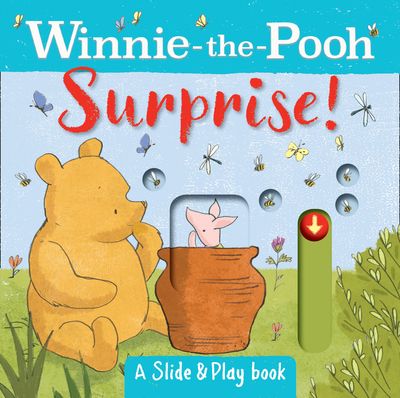 Pull the tabs to surprise Winnie-the-Pooh in this novelty board book!

In this fun, interactive board book for young Winnie-the-Pooh fans, Pooh gets lots of surprises as he finds his friends all around the Hundred Acre Wood. Who will he bump into and what are they doing? Pull the tabs to find out!

This board format is perfect for little hands, with sturdy pull tabs that young Pooh fans aged 2-4 years old will love moving from side to side or up and down, again and again, to see who they reveal.

The beautiful, colourful illustrations in the Winnie-the-Pooh Surprise Slide and Play Book include lots of things to look for and to count, to really keep young readers engaged and entertained.

A fun tabbed board book that’s perfect for 2 to 4 year olds.

It provides interactive fun, so young children can really get involved by moving the pull tabs and enjoying seeing how the pictures change.

Author: Winnie-the-Pooh
Format: Board Book
Ageband: 2 to 6
Release Date: 07/01/2021
Pages: 12
ISBN: 978-1-4052-9634-2
Based on the Winnie-the-Pooh stories by A.A.Milne and with illustrations that echo the look of the iconic decorations created by E.H.Shepard.A.A.Milne was born in London in 1882 and later became a highly successful writer of plays, poems and novels. He based Winnie-the-Pooh, Piglet and friends on the real nursery toys of his son, Christopher Robin and published the first of their adventures together in 1926. Since then, Pooh has become a world-famous bear, and Milne's stories have been translated into seventy-two languages.E.H.Shepard was born in London in 1879. He was a cartoonist and artist, and went on to draw the original decorations that accompanied Milne's classic stories, earning him the name 'the man who drew Pooh'.