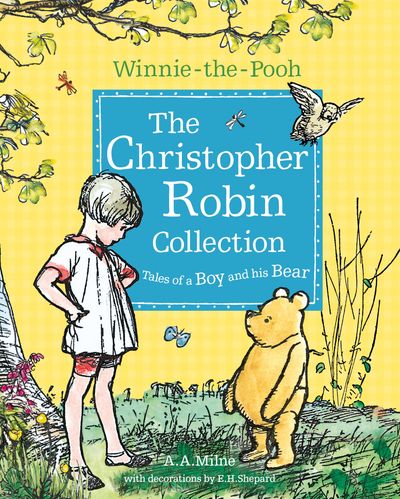 Winnie-the-Pooh: The Christopher Robin Collection (Tales of a Boy and his Bear)

Christopher Robin lives behind a green door in the Hundred Acre Wood. He likes catching Woozles, leading expeditions and throwing parties with Piglet, Rabbit, Eeyore and, of course, his very best friend, Winnie-the-Pooh.

This charming collection of stories and poems features the wonderful adventures that Christopher Robin has with Winnie-the-Pooh and his friends in the Hundred Acre Wood.

The stories are selected from A.A.Milne’s Winnie-the-Pooh, The House at Pooh Corner, When We Were Very Young and Now We Are Six. These extraordinary tales of a Boy and his Bear, are accompanied by E.H.Shepard’s beautiful, timeless and iconic decorations.

This collection of favourite stories and poems is the perfect present for fans of the Winnie-the-Pooh, Christopher Robin and friends, teaching lessons of friendship and reflecting the power of a child’s imagination.

Author: A. A. Milne
Format: Paperback
Ageband: 5 to 9
Release Date: 05/10/2017
Pages: 160
ISBN: 978-1-4052-8801-9
A.A.Milne was born in London in 1882 and became a highly successful writer of plays, poems and novels. He based Winnie-the-Pooh, Piglet and friends on the real nursery toys of his son Christopher Robin and published the first book of their adventures together in 1926. Since then, Pooh has become a world-famous bear, and Milne’s stories have been translated into seventy-two languages.E.H.Shepard was born in London in 1879. He was an artist, illustrator and cartoonist and went on to draw the original decorations to accompany Milne’s classic stories, earning him the name ‘the man who drew Pooh’.

‘… a masterpiece in children’s literature … reflects the power of a child’s imagination like no other.’, The Independent -

Winnie-the-Pooh: The Complete Collection of Stories and Poems by A.A.Milne was named #1 in a list of the 20 Greatest Mental Health Books, Happiful magazine -