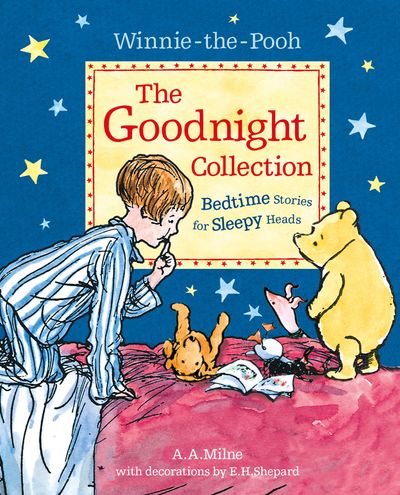 Winnie-the-Pooh knows all about thinking grand thoughts, playing fun games and saying wise words to himself. What better companion could there be to read about as you snuggle down to go to sleep.

This charming collection of stories and poems, selected from A.A.Milne’s Winnie-the-Pooh, The House at Pooh Corner, When We Were Very Young and Now We Are Six, tells enchanting tales of Winnie-the-Pooh and his friends, accompanied by E.H.Shepard’s beautiful illustrations. It is the perfect timeless bedtime treasury to read before you go to sleep and dream of the adventures to be had in the days to come.

The Goodnight Collection follows on from The Christopher Robin Collection in making the stories and poems more accessible to new readers of Winnie-the-Pooh with it’s playful approach to the text and illustrations, showing the fun and imagination behind the classic stories.

Author: A. A. Milne, Illustrated by E. H. Shepard
Format: Paperback
Ageband: 5 to 9
Release Date: 03/10/2019
Pages: 160
ISBN: 978-1-4052-9439-3
A.A.Milne was born in London in 1882 and later became a highly successful writer of plays, poems and novels. He based Winnie-the-Pooh, Piglet and friends on the real nursery toys of his son Christopher Robin and published the first of their adventures together in 1926. Since then, Pooh has become a world-famous bear, and Milne’s stories have been translated into seventy-two languages.E.H.Shepard was born in London in 1879. He was a cartoonist and artist, and went on to draw the original decorations to accompany Milne’s classic stories, earning him the name ‘the man who drew Pooh’.