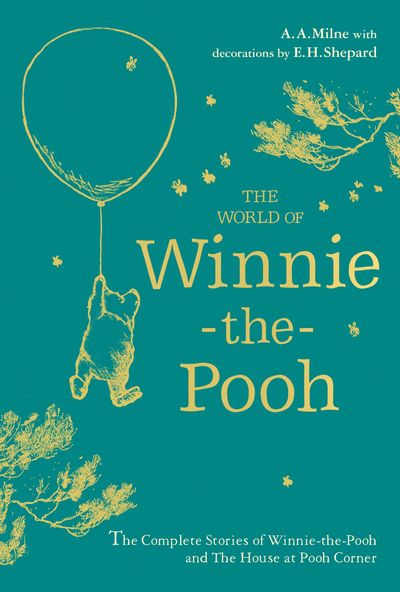 The adventures of Pooh and friends in the Hundred Acre Wood are brought to life in this beautiful edition containing E.H.Shepard’s original line decorations.

Meet the best bear in all the world for the first time in Winnie-the-Pooh, where he gets into a tight place, nearly catches a Woozle and heads off on an ‘expotition’ to the North Pole with the other animals. The adventures continue in The House at Pooh Corner, where Pooh meets the irrepressible Tigger for the first time, learns to play Poohsticks and sets a trap for a Heffalump.

Heart-warming and funny, Milne’s masterpiece reflects the power of a child’s imagination like no other story before or since. The Winnie-the-Pooh stories are timeless children’s classics.

Author: A. A. Milne, Illustrated by E. H. Shepard
Format: Hardback
Ageband: 5 to 9
Release Date: 01/10/2020
Pages: 352
ISBN: 978-1-4052-9911-4
Based on the ‘Winnie-the-Pooh’ works by A.A.Milne and E.H.Shepard, A.A.Milne was born in London in 1882 and later became a highly successful writer of plays, poems and novels. He based Winnie-the-Pooh, Piglet and friends on the real nursery toys of his son Christopher Robin and published the first of their adventures together in 1926. Since then, Pooh has become a world-famous bear, and Milne’s stories have been translated into seventy-two languages.E.H.Shepard was born in London in 1879. He was a cartoonist and artist, and went on to draw the original decorations to accompany Milne’s classic stories, earning him the name ‘the man who drew Pooh’.

The adventures of Pooh and friends in the Hundred Acre Wood are brought to life in this beautiful edition containing E.H.Shepard’s original line decorations.