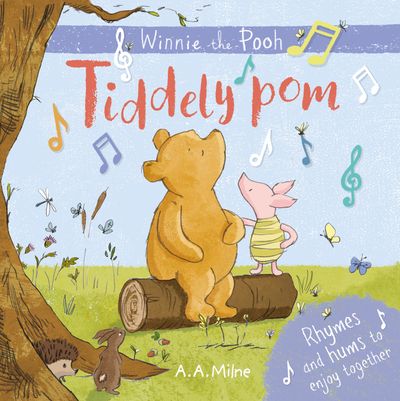 Winnie-the-Pooh: Tiddely pom: Rhymes and hums to enjoy together

By A. A. Milne, Illustrated by Eleanor Taylor and Mikki Butterley
Buy now

Join in the rhyming fun in this first Winnie-the-Pooh board book.

With a rum-tum-tiddle and a tiddely pom, everyone’s favourite rhymes and hums from the Bear of Very Little Brain have been gathered here in this beautifully-illustrated first board book for babies and toddlers.

Author: A. A. Milne, Illustrated by Eleanor Taylor and Mikki Butterley
Format: Board Book
Ageband: 1 to 5
Release Date: 02/05/2019
Pages: 14
ISBN: 978-1-4052-9336-5
Based on the ‘Winnie-the-Pooh’ works by A.A.Milne and E.H.Shepard, A.A.Milne was born in London in 1882 and later became a highly successful writer of plays, poems and novels. He based Winnie-the-Pooh, Piglet and friends on the real nursery toys of his son Christopher Robin and published the first of their adventures together in 1926. Since then, Pooh has become a world-famous bear, and Milne’s stories have been translated into seventy-two languages.E.H.Shepard was born in London in 1879. He was a cartoonist and artist, and went on to draw the original decorations to accompany Milne’s classic stories, earning him the name ‘the man who drew Pooh’.

Winnie-the-Pooh: Tiddely pom: Rhymes and hums to enjoy together

Join in the rhyming fun in this first Winnie-the-Pooh board book.

With a rum-tum-tiddle and a tiddely pom, everyone's favourite rhymes and hums from the Bear of Very Little Brain have been gathered here in this beautifully-illustrated first board book for babies and toddlers.