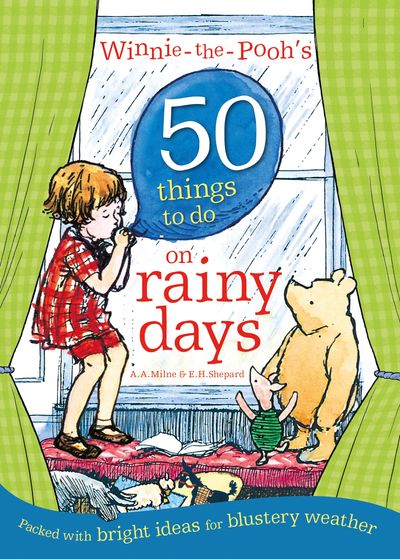 Winnie-the-Pooh's 50 Things to do on rainy days

Wondering what to do on a rainy day? Pooh and his friends have lots of ideas!

The friends of the Hundred Acre Wood have 50 things to try on rainy days. Join Winnie-the-Pooh, Piglet, Tigger and Owl as they build a rain gauge, find Eeyore’s tail and take part in a scavenger hunt.

With step-by-step instructions and helpful hints, plus room for drawings and photos of your adventures, this handbook is filled with perfect ideas for the greyest of days.

How long will it take to finish all 50 things?

Author: A. A. Milne
Format: Paperback
Ageband: 3 to 7
Release Date: 04/04/2019
Pages: 80
ISBN: 978-1-4052-9301-3
Based on the ‘Winnie-the-Pooh’ works by A.A.Milne and E.H.Shepard, A.A.Milne was born in London in 1882 and later became a highly successful writer of plays, poems and novels. He based Winnie-the-Pooh, Piglet and friends on the real nursery toys of his son Christopher Robin and published the first of their adventures together in 1926. Since then, Pooh has become a world-famous bear, and Milne’s stories have been translated into seventy-two languages.E.H.Shepard was born in London in 1879. He was a cartoonist and artist, and went on to draw the original decorations to accompany Milne’s classic stories, earning him the name ‘the man who drew Pooh’.